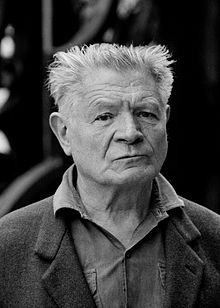 Alain Cuny, whose real name was Rene Xavier Marie , came to film only indirectly. First he attended the Institut Libre de Saint-Lo and the College Locroy-Saint-Leon , then he studied architecture at the Ecole Nationale Superieure des Beaux-Arts in Paris. With Charles Dullin he took the performing arts. Cuny specialized in equipment and costume design. In this activity he also found work in film, for directors such as Alberto Cavalcanti (for whom he also worked as an assistant director), Jacques Feyder and Jean Renoir .

He made his first appearances as an actor in the theater in the late 1930s. His film debut followed in 1939 in Jean Grémillon's Remorques . During the Second World War he mainly worked for the theater, including Jean Vilars Théatre National . He had his greatest stage success in 1947 at the Avignon Festival in Paul Claudel's L'Histoire de Tobie et de Sarah . In the mid-1950s he finally worked for Jean-Louis Barrault and his wife Madeleine Renaud in their theater company, which earned him the reputation of a great actor in tragedy.

In 1942 Marcel Carné hired him for the production The Night with the Devil . Even at this time he was playing psychologically more complex characters in films, mainly due to his theater work. In the fifties he played mostly in Italian films, including in the Italian-French co-production The Hunchback of Notre Dame , where he alongside Anthony Quinn and Gina Lollobrigida to Claude Frollo mimed. He finally had his greatest film success in 1960 as Steiner in Federico Fellini's La dolce vita . He then continued to play for well-known directors, such as Fellini in Fellini's Satyricon or Francesco Rosi in Uomini contro ( Battalion of the Lost , 1970) and Cristo si e fermato a Eboli (1979), but his film appearances became rarer. In addition, his appearance in the soft porn Emmanuelle (1974) irritated the mostly benevolent critic community.

Cuny made a name for himself for the last time in 1992 when, at the age of 83, he presented his directorial debut at the Berlinale with L'Annonce faite a Marie . This also earned him an entry in the Guinness Book of Film Records as the oldest director at the time who made his first film.

Alain Cluny's acting art found its worthy conclusion at the age of 84 in Edouard Nierman's drama “ Casanova's Return ”. In the role of the aging Marquis de Cesi he was allowed to subtly display his acting qualities to the full for the last time. At the side of Alain Delon in the role of Casanova, he offered an equal performance.

In 1992 Cuny received the Joseph Plateau Award of Honor for his life's work at the International Flanders Film Festival in Ghent .