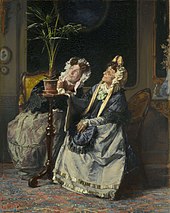 Under the Palm (1880, Rijksmuseum Amsterdam)

Draft for the above painting (pencil)

Alexander Bakker Korff, the son of the lawyer and politician Johannes Bakker-Korff (1789–1869) and his wife Neeltje Stark (* 1794 in Amsterdam), first learned his trade in his hometown with Cornelis Kruseman and Huib van Hove (1814–1864 ). Then he went to the Koninklijke Academie voor Schone Kunsten van Antwerpen , where he studied with Gustave Wappers and Nicaise de Keyser .

In 1856 Alexander Bakker Korff settled in Leiden, broke with the academic painting tradition and henceforth almost exclusively portrayed elderly women - in contemporary, middle-class costumes. The carefully painted costumes of those women and sometimes the witty title of the picture made him popular. On the back of his picture Under the Palm , for example, he quoted Heine :

We want to sink down there
Under the palm tree.

Museums with works by Bakker Korff: