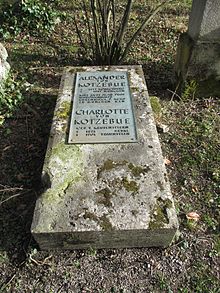 Alexander von Kotzebue was the son of the playwright August von Kotzebue from his third marriage to Wilhelmina Friederike von Krusenstern. At the age of four he witnessed the murder of his father by Karl Ludwig Sand in 1819 . He was then educated in the St. Petersburg Cadet Corps , which he left in 1834 as a Guard Lieutenant. But he turned to art and studied from 1837 to 1845 at the Petersburg Academy of Art as a student of Sauerweid . From 1847–1848 he studied as a pensioner for Emperor Nikolais I in Paris, then traveled to Belgium, Holland, Italy and Stuttgart until he finally settled in Munich.

Kotzebue was an imperial Russian court painter, received the title of professor at the Petersburg Art Academy in 1857; he was an honorary member of the Academy of Fine Arts in Munich.

His first painting, The Storming of Warsaw , was created in Saint Petersburg in 1844. Since then he has created numerous large-format depictions of Russian battles in the Seven Years' War and in Suvorov's campaigns for the Tsar of Russia. The most important of them are: Storming of Schluesselburg , Battle of Poltava , Storming of Narva , Crossing over the Devil's Bridge , The founding of Petersburg ( Maximilianeum in Munich).