The old riding arena from a south-eastern perspective; on the left is the Maritim Hotel

The old riding hall is an important monument of 19th century steel architecture in the Baden-Württemberg state capital, Stuttgart . It was built to develop the city's horse market.

The steel and glass building was built in 1887/88 on the initiative of private interest groups. The use of new technologies in the style of the Italian Renaissance was progressive . The building is a historical monument. The hall was designed by the architect Robert von Reinhardt (also responsible for the Marienhospital Stuttgart ) based on the model of a modern multi-purpose hall , which, in addition to equestrian events, should be able to accommodate horse performances, circus and operetta performances and offer a forum for other exhibitions and performances. In this respect, it can be regarded as the forerunner of the Hanns-Martin-Schleyer-Halle . The “Königliche Reithaus” on Neckarstraße, built in 1839, was previously used for equestrian events, a hall that was built by the architect Giovanni Salucci , known for his Rosenstein Castle and burial chapel on the Württemberg , and stood until 1958.

The old riding arena was designed by the architect Robert von Reinhardt , a student of Christian Friedrich von Leins , an important Stuttgart architect and professor at the Technical University . Was used brick , this partly with sandstone -version. The hall has a surrounding basilica plan with an open gallery . This rests on filigree supports and runs under a continuous ribbon of windows. Architecturally- historically interesting and striking is an oval ring with a wide-spanned roof construction made of iron trusses. The supports are intentionally kept visible.

Bosch acquired the riding arena in 1926 . During the Second World War it was considerably destroyed in 1944 and rebuilt in a somewhat simplified form. In 1969 the state acquired the hall. For a long time it served as a storage facility, although there were plans for other uses, such as a university cafeteria and congress center . In 1989 the Landesgirokasse Stuttgart became the owner of the property, which started renovating in 1990. Today the old riding hall is integrated in the Stuttgart Maritim hotel complex and serves as a banquet hall . The hall is used, among other things, for congresses, exhibitions, product presentations and gala events - both for business purposes and for private individuals. In addition, the hotel's own events take place here, e.g. B. the Christmas Soulnight instead. The highlight of the hall are the two chandeliers, each 7.5 m in diameter and 1.5 t in weight. 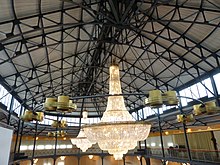 To the south is the “Bosch-Areal”, the headquarters of the Bosch company. The Liederhalle is located to the southeast .