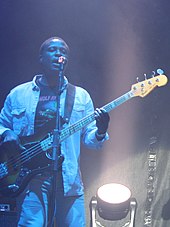 Alvis Reid (born October 19, 1985 in Kingston ) is a bass player from Jamaica who now lives and works mainly in Austria.

Alvis Reid grew up as the son of a pastor near Kingston. At the age of 14 he started playing the electric bass as part of his father's gospel / church music . He attended Oberlin High School and then Edna Manley College of the Visual and Performing Arts (EMC). There Reid dealt increasingly with jazz and reggae music and played in the first secular bands. This was followed by concert tours across Jamaica, the Caribbean and America. Reid completed these live performances with Jamaican show greats such as Tessanne Chin , Etana , Queen Ifrica , Gyptian , Fantah Mojah , Nadine Sutherland and many others.

In 2008, he became a regular member of the weekly TV talent show Digicel Rising Stars . Despite the success, Reid decided to continue his musical career in Europe in October of the same year. He moved to Austria and graduated from the Vienna Music Institute .

He began touring Europe with bands like La Cherga and Millions of Dreads . As a studio musician, he worked for artists such as Samuele Vivian, Dero & Klumzy and Diamusk.

In 2014 he added some tracks to the album Werwolf-Attacke - Monsterball ist der Erste Allgemeine Verunsicherung (EAV) with his bass playing. Due to his stylistic range, which includes pop-rock , reggae, ska , gospel and jazz, this band hired him a year later. Together they made over 170 appearances and completed 3 further productions. This collaboration came to an end in September 2019 after an extensive farewell tour through Austria, Germany, Italy and Switzerland. The albums created with his participation received gold and platinum awards .

Today Reid is part of the Styrian pop band Egon7 , from KIXXSYMPHONICS and Dero & Klumzy. At the same time he is working on his own band project (as of May 2020), in which he wants to appear as a composer and producer.