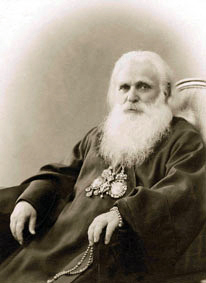 In 1885 he graduated from the Theological Seminary in Tbilisi. He was ordained a priest in Abkhazia and worked in Sukhumi , the New Athos monastery and Lichini near Gudauta . He also taught Georgian there and criticized the Russian authorities for the Russification of Abkhazia and the stirring up of anti-Georgian emotions in the Abkhaz population.

From 1896 to 1900 he studied at the Theological Academy in Kazan , he wrote his thesis on "The struggle of Christianity against Islam in Georgia" . In 1901 he returned to Georgia as a priest monk , became archimandrite of the Chelishi monastery in the northwestern province of Ratcha. In 1904 he moved to the office of the Church Synod in Tbilisi and became Archimandrite of the Monastery of the Transfiguration of the Lord .

After the turn of the century he was one of the spokesmen for a movement for the autocephaly of the Georgian Orthodox Church, he demanded the restoration of its independence, which was abolished by Russia in 1811, the use of the Georgian language in worship and the filling of 740 vacant priestly posts. In 1905 he took part in a conference of the Georgian clergy in Tbilisi, which was dissolved by the police. In the same year he was banned from holding church services. He was deported to central Russia and banished to the Troiski monastery in Ryazan , where he studied early Georgian church history.

He was released in 1910 but was not allowed to return to Georgia before the collapse of the Tsarist regime in 1917. The Georgian Orthodox Apostle Church, which had become independent, consecrated him in the same year as Metropolitan of Tschkondidi, western Georgia.

On October 14, 1921, the Synod elected him to succeed the Georgian Patriarch Leonide, who had died of cholera . He took office eight months after the Democratic Republic of Georgia was occupied by the Red Army . The Bolsheviks deprived the Orthodox Church of its independent legal status, persecuted the clergy , closed churches and monasteries, and confiscated church property .

On February 7, 1922, Ambrose protested in a memorandum to the participants in the Genoa Conference on behalf of the Georgian people against the occupation of Georgia and the human rights violations of the Soviet regime. He called on the civilized states to intervene to end the political persecution in the country.

In February 1923 Ambrose and all members of the Georgian Patriarchalrates were by the Soviet secret police GPU arrested and in custody taken. In March 1924, a public show trial was opened against them. Ambrose was charged with conspiracy with the West and hiding historical church treasures that were to become state property .

Although the clergymen arrested with him expressed solidarity with Ambrose, the patriarch took sole responsibility for the measures of the church leadership during the process. He said they were in line with his duty and the traditions of the Georgian Church. His defense ended with the sentence: “My soul belongs to God, my heart to my country. You, my executioners, may do what you want with my body. ” The judges did not venture a death sentence , but sentenced Ambrose to eight years imprisonment and the confiscation of his property.

In 1926, Ambrosius was released early from prison . However, the public attacks against him were not stopped. He died as a result of imprisonment and was buried in the Sioni Cathedral in Tbilisi.

In September 1995 he was canonized by the Synod of the Georgian Orthodox Apostle Church and was given the honorary name of Saint Ambrose the Confessor (Georgian ამბროსი აღმსარებელი, Ambrosi Agmsarebeli ). The day of his death, March 29, was determined to be his name day.

Commons : Ambrosius I.  - Collection of images, videos and audio files