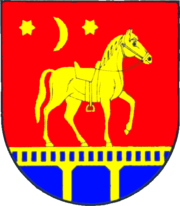 Coat of arms of the former office of Wiedingharde

The office Wiedingharde was an office in the district of North Friesland in Schleswig-Holstein . On January 1st, 2008 it went up in the South Tondern office .

The office was named after the Wiedingharde , a lower administrative district in the Duchy of Schleswig . It had an area of ​​125 km² and last almost 4400 inhabitants in the communities

On January 1, 2008 the office merged with the city of Niebüll , the municipality of Leck and the offices of Karrharde , Süderlügum and Bökingharde to form the new office in Südtondern , based in Niebüll.

Blazon : “In the blue base of the shield a golden wooden bridge resting on two supports, on it in red a golden horse with saddle and stirrup striding to the left. Above right a waxing golden moon accompanied on both sides by a six-pointed golden star. "