The Potsdam District Court is a court of ordinary jurisdiction with its seat in Potsdam .

Royal District Court of Potsdam in 1883

The Prussian Empire Judiciary of 1879 saw new instance paths and responsibilities of the courts and prosecutor's offices before which made it necessary in addition to a District Court a district court to establish. In preparation for this, the Prussian Minister of Justice Leonhardt sent a decree to the First President of the Royal Court of Justice on March 27, 1877 with the request for assistance in acquiring a piece of property. The construction of such a courthouse in the second royal seat of the state aroused lively interest. According to the plans, it should be built in the vicinity of well-known historically and architecturally outstanding monumental buildings. However, since no public building site was available, the decision was made to buy a plot of land on the northern edge of the city between Nauener- and Jägertor at Mauerstraße 8 (later Kaiser-Wilhelm-Straße and now Hegelallee) in a free and quiet location, which is also should ensure the construction of undisturbed meeting rooms. For this, the building had to be separated from the promenade by a 12 m deep front garden.

It is assumed that the artistic development and furnishings that go beyond the usual measure can be traced back to the lively participation of Crown Prince Friedrich and members of the Prussian royal family in the design of the building. Heinrich Herrmann and Karl Friedrich Endell were responsible for developing the content and architectural specifications for the courthouse .

The construction work began on June 15, 1880. The building owner was the Ministry of Public Works, based in Berlin , which had entrusted the management of the construction to the government master builder Karl Moritz, taking into account the scope and in the interest of speeding up construction. At the request of Crown Princess Victoria, the facade was decorated with larger-than-life statues of King Frederick II and Emperor Wilhelm I. In a wide frieze between the first and second floors, the busts of the other 16 Electors of Brandenburg between 1415 and 1883 are from the house Hohenzollern shown.

There were 45 rooms on the three main floors. In addition to a large hall for the civil and criminal chambers, a jury room was built in the middle of the building on the first floor to hold jury courts , which enabled prisoners to be brought in separately from the audience.

In the basement there were storage rooms, the depository and the auction room . The rooms of the district court president Sello, the first public prosecutor of Stael-Holstein, the public prosecutor Frege and the court assistant Käswurm were located on the ground floor. In addition to the library, the auditor and accountant and other court clerks were housed here. There were four court clerks for general and presidential matters, the 1st and 2nd civil chambers and a criminal chamber. A total of 67 employees of the regional court and the public prosecutor's office worked in this building, including the trainee lawyers, trainee lawyers, a castellan and an auxiliary court clerk.

The new building of the district court

In order to secure the transport of prisoners, the Minister of Public Works planned to build a prison directly behind the district court building, which was met with violent opposition from the Potsdam district president, Karl von Neefe . On March 13, 1902, he justified his refusal to the President of the Royal Court of Justice and the Minister of Public Works in Berlin by saying that a prison building would not be in one of the most elegant districts of Potsdam in the immediate vicinity of the new government building in Spandauer Strasse (Friedrich- Ebert-Straße), but should better be set up in the building of the district court at Lindenstraße 54. Here, the transport of the prisoners to the jury court could be arranged by purchasing a car that should be designed so that it could also serve as a filing car for the judicial authorities.

In the years 1907–1909, the court building at Lindenstrasse 54, where the public prosecutor's office and later the Reich disciplinary chamber were located, was converted accordingly. The building was used in both German dictatorships as an intelligence prison, was after the turn of House 1989 democracy and is today as Memorial Lindenstraße 54/55 used.

The flat roof of the front district court building was converted and raised accordingly.

At that time the district court was under the direction of the regional court and had no director of its own.

In the years 1952–1990 the building of the district and regional court in Hegelallee 8 was used by the GDR Ministry for State Security as a district administration. A so-called supply center for the employees of the state security of the Potsdam district was set up here. A pharmacy was housed in the rear district court building, a sauna and various amusement facilities were set up in the basement and the former presidential room was converted into an X-ray room.

In 1966, the statues of Old Fritz and Emperor Wilhelm I were dismantled from the middle niches on the street front of the district court building.

The State Security then had a concrete building erected on the neighboring property at Hegelallee 7 between 1978 and 1980, which architecturally distorted the courthouse. In the course of the construction work, the busts of Electors Friedrich I , Friedrich II , Albrecht Achilles and Johann Cicero on the right side of the regional court were also dismantled, but fortunately saved from destruction by tradition-conscious Potsdam citizens. Today they are in the large hall of the district court or at their old location in the facade.

New formation of the district court

With the introduction of the structure of the Courts Constitution Act on February 1, 1993, the local courts were also reintroduced. The Potsdam District Court was also given jurisdiction for the entire district court in some essential areas such as the commercial register and the insolvency department and was given local responsibility for areas of the former district courts of Potsdam-Stadt and Potsdam-Land.

Reconstruction and renovation of the courthouse 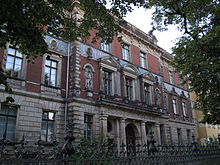 Due to the decades of use of the building of the regional and district court by the district administration of the Ministry for State Security, it was in a desolate condition. Extensive work to preserve the building was necessary as well as numerous measures to create a modern courthouse.

The planning order was placed on January 7, 1994 and the construction documents were approved on August 26, 1996. Approval from the highest building supervisory authority took place on April 11, 1997. Construction work on the rear building began in the same year. This first construction phase was completed quickly two years later. The renovation of the front building began immediately afterwards. This second construction phase was completed on October 1, 2001, with the exception of the jury court room. From a historical preservation point of view, 3,420 m² of main usable area was renovated during this time. Particular importance was attached to the preparation of the facade, the main staircase and the large hall. In particular, 161 office workplaces were created, including rooms for the management of the authorities, 12 negotiating rooms, the library and the cafeteria and a detention cell area, converted, expanded and restored. 80 construction companies and 20 architects, engineers, specialists and restorers were involved in the renovation.

Since 2012 there is only the branch in the Justice Center Potsdam . This is where the supervision and insolvency court, the commercial and association register and the criminal departments of the Potsdam District Court are located.