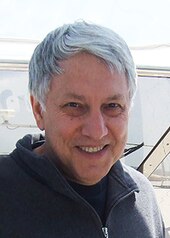 Andrei Dmitrijewitsch Linde ( Russian Андрей Дмитриевич Линде ; born March 2, 1948 in Moscow ) is a Russian cosmologist and one of the founders of the inflation theory of the universe.

Linde was born to the physicist Dmitri Pawlowitsch Linde and the physics student Irina Vyacheslavovna Rakobolskaja . He studied physics from 1966 to 1971 at Lomonosov University in Moscow. He then worked at the Lebedev Institute , where he completed his habilitation in 1975 (Russian doctorate) and was also a professor from 1975 to 1985. There he was a student of David Abramowitsch Kirschniz . He worked at CERN from 1989 to 1990 , and has been Professor of Physics at Stanford University in California since 1990 . His wife, the theoretical physicist Renata Kallosh, also works there . The couple have two sons, Dmitri and Alexander.

He did preparatory work in the 1970s for the development of the inflation theory ( proposed in the West by Alan Guth in 1980) and was one of the theorists of the subsequent improvements to the new inflation theory , independently of Paul Steinhardt and Andreas Albrecht (1981). Soon afterwards he developed the hypothesis of chaotic inflation , developed the theory of eternal inflation by Alexander Vilenkin and founded the theory of multiverses , which he also dealt with in the context of string theory .

In 2001 Linde was awarded the Oskar Klein Medal for Physics from Stockholm University , in 2002 he received the Dirac Medal (ICTP) from the ICTP and in 2004 he was awarded the Gruber Prize for Cosmology for the development of the inflation theory. He has been a member of the National Academy of Sciences since 2008 and of the American Academy of Arts and Sciences since 2011 . In 2012 he received the Fundamental Physics Prize and in 2014 the Kavli Prize in Astrophysics. He is an external member of the Norwegian Academy of Sciences .