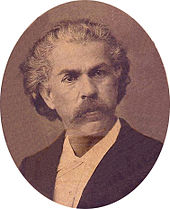 After emerging as a composer early on, Carlos Gomes studied at the Conservatory of Rio de Janeiro from 1860 . In 1864 he went to Milan at the instigation of Emperor Pedro II , where he became a student of Lauro Rossi . In 1866 he passed the composition examination at the Conservatory of Milan . In the following years he lived as a composer in Italy, where many of his operas were performed in the major opera houses. In 1895 he became director of the Belém Conservatory.

For the anniversary of the United States' declaration of independence , he composed the hymn Saudação do Brasil . The Colombo Oratorio for choir and orchestra to mark the four-centenary of Columbus' discovery of America is considered a key work in Brazilian musical history. Gomes also composed a mass , canzonets , male choirs, songs and piano pieces.

The opera Il Guarany by Antônio Carlos Gomes, composed between 1868 and 1870, is considered a milestone in Brazilian music history. It premiered at La Scala in Milan and was then performed across Europe. After the premiere, Giuseppe Verdi said that Gomes started where he left off (“Questo giovane comincia dove finisco io!”).

Documents written by Gomes were included in UNESCO's list of World Document Heritage in 2017 .

The last days of Carlos Gomes.
Overture to Il Guarany - US Marine Band