Bice Portinari (* 1266 ; † June 8, 1290 ) was a daughter of the Florentine banker Folco Portinari and possibly Beatrice in the work of the poet Dante Alighieri , but this is not certain. 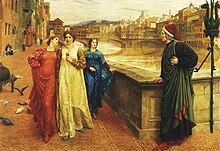 Dante meets Beatrice at the Ponte Santa Trinita , as interpreted by Henry Holiday in 1883

When she was eight, a girl named Beatrice first met the almost nine-year-old Dante at a spring festival. Nine years later, the two met a second time when she presented him with a wreath of flowers at a youth festival. Both times he was moved by her angelic figure. Later, Dante was present at Beatrice's wedding. At the age of 24, she died in an epidemic. Dante encrypted the date of death numerologically , so that today June 8, 1290 is considered certain. The memorial plaque for Beatrice Portinari at the family grave site Portinari in the Chiesa di Santa Margherita dei Cerchi , Florence, does not indicate the place of burial, as wives were usually buried with their husbands' families.

In his first work, Vita Nova, Dante lets the first-person narrator describe the inner changes that he went through as a result of his first childlike encounter with Beatrice, which he has adored ever since and beyond death.

In his Divine Comedy , it is the figure of Beatrice in heaven who instructs the poet Virgil to lead the narrator (Dante) through the circles of hell and the purgatory . At the entrance to the Paradiso , Beatrice herself takes the lead through the nine heavenly spheres. With him it is a symbol of perfect redemption.

A real girl was always assumed to be behind the girl figure of Beatrice, even if Dante certainly chose a fictional one for his poetry instead of the actual name of his loved one. A connection between the Bice Portinari and Beatrice was first suspected by the medieval Dante biographer Giovanni Boccaccio , but not proven. In the 19th century, Dante researchers such as Michele Scherillo, Giovanni Andrea Scartazzini , Isidoro Del Lungo and Joachim Joseph Berthier identified Beatrice with the daughter of the banker Portinari. At the age of 20, she married the banker and knight Simone dei Bardi . The received paternal instruction of her dowry proves the existence of Bice Portinaris. The equation of Beatrice and Bice, however, has also been heavily disputed.

Dante himself was married to Donna Gemma di Manetto from the noble Donati family around 1285 . However, he was deeply influenced by his first childhood sweetheart, which in his case turned into a transfiguration of Beatrice. There is reason to interpret all of Dante's communications about Beatrice in a symbolic sense or in the sense of medieval minstrels .