A urinary catheter is a plastic tube that is inserted into the bladder either through the urethra (transurethral) or the abdominal wall (suprapubic or abdominal wall catheter) . It is used for urinary diversion or urine recovery . The length is given in centimeters and the thickness in charrière .

Ways to remedy bladder emptying disorders using catheters were already known in ancient times. The oldest known urinary catheters come from finds in Pompeii and were made of metal ( bronze ). To dilate the urethra, Oreibasios von Pergamon (325–403 AD) used parchment , which he wrapped around a goose quill. He inserted this stick into the urethra and left it for three days. The moisture in the urethra caused the parchment to swell, thereby dilating the urethra. Bronze catheters were later placed.

Paulus of Aegina described a method of irrigation of the bladder around 340 AD. For this purpose, a liquid-filled cattle bladder was attached to a bronze catheter. The patient's bladder could be rinsed out by pressing the beef bladder. The Arab doctor Albucasis used a plunger syringe around the year 1000 AD.

It was not until the 19th century that catheters of various shapes and sizes were made from vulcanized rubber by Jean Zuléma Amussat (1796–1852), Maisonneuve (1809–1894), Auguste Nélaton (1807–1873) and Mercier (1811–1882). Couvelaire (1903–1986) developed a special catheter from the perspective of the time, which is still often used today in addition to the Tiemann catheter. Leopold Casper (1859–1959) developed a catheter that is designed to hold itself in the bladder . In 1927, the American urologist Frederic Eugene Basil Foley (1891–1966) developed the balloon catheter generally used today as an indwelling catheter, known internationally as the Foley catheter.

A distinction can be made according to type, material or intended use. The individual types are distinguished in more detail below.

Today all transurethral indwelling catheters are balloon catheters. In addition to the different shapes of their tips and the number of openings, a distinction is made here between 2-way and 3-way catheters.

In addition to the channels mentioned above, the 3-way catheter (also known as the irrigation catheter ) has a third channel that is used to introduce irrigation solutions. This catheter is mainly used in urology after transurethral operations and when there is heavy bleeding in the bladder. The point here is to use flushing to prevent the blood from clotting in the urinary bladder. These catheters can have a reinforced wall so that active bladder lavage (e.g. drawing off blood clots with a urinary syringe ) does not lead to a collapse of the lumen .

The filling channel of the balloon is equipped with a valve to prevent the blocking medium from escaping. Sterile distilled water or a special 10% glycerine solution are used as filling medium for the balloon .

The suprapubic urinary catheter is primarily used for permanent urinary drainage. In contrast to the transurethral urinary catheter, this is not inserted into the urinary bladder through a natural opening, but through the abdominal wall above the pubic bone .

This type of catheter can also be used for urodynamic examinations, as the bladder sphincter is not affected.

The catheter materials have undergone development in recent years. In the early days only rigid materials such as metals or glass were used, later rubber , which has now been replaced by other flexible materials such as latex , PVC and silicone . State-of-the-art catheters are partially provided with a hydrophilic coating, which additionally increases the lubricity. Catheter for long-term use can with very thin coatings of diamond- like carbon (diamond-like carbon or DLC) are provided, in order to minimize bacterial colonization. The selection of the material also essentially determines the length of time the catheter remains in the patient. 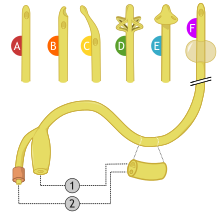 Nelaton
This catheter has a closed hollow point with two opposing eyes or four offset eyes. This type of catheter can be used for both female and male patients. This type is probably the most frequently used type for both transurethral and suprapubic applications.

Mercier
The shape of the Mercier catheter is almost like the Tiemann catheter, except that its hollow tip is not conical and it has two offset eyes.

Couvelaire
The Couvelaire catheter has an open front flute tip with two lateral eyes. It is widely used for bladder irrigation because of its large opening at the tip.

Dufour
The Dufour catheter is shaped almost like a Tiemann catheter, except that it has two offset eyes and a flute tip that is open at the front.

Frohmüller
It has a closed hollow point with three laterally offset eyes. As with the Tiemann catheter, the tip is slightly curved, but does not taper in diameter.

Foley
The Foley catheter is actually a catheter with a Nelaton tip, except that it has a balloon to fix the catheter in the bladder. However, other catheter shapes (e.g. Tiemann) are also used as Foley catheters.

Malecot
The Malecot catheter has a similar head shape to the Casper catheter. It has two wings at the front that could only be stretched with a stick. This catheter is practically no longer used today.

Casper
The Casper catheter has a head shape similar to a four-wing whorl and is thereby fixed in the bladder. This catheter is practically no longer used today, as it could only be inserted with the help of a rod that stretched the front part of the catheter.

Troublemaker
A relatively new catheter is the Stöhrer catheter. The specialty of this catheter lies in its flexible tip, which is conical and has a small spherical thickening at the end. This tip makes it particularly easy to insert the catheter into the urethra, as less pressure is exerted on the urethral mucosa at the tip. Another new feature of this catheter are the specially shaped eyes, which limit damage to the mucous membrane to a minimum.

In 40 to 50% of all patients with urinary catheters, complications arise due to the occlusion of the catheter due to deposits and incrustations. This problem occurs primarily when the catheter is in place for a longer period of time, but the catheter can become completely blocked after just one week of being in place. Any patient with a blocked catheter runs the risk of an emergency in the emergency room, as the urine drainage no longer takes place and the urine can back up to the kidneys, which can lead to life-threatening kidney failure.

The risk of bacterial colonization of a urinary catheter increases with the length of time it is in place by approx. 5% every day, after 7 to 10 days the risk is 100%, i.e. H. practically every patient is then affected by a catheter infection. Such infections are only treated with antibiotics if they have accompanying symptoms; however, some types of germs show resistance, which makes treatment difficult. As a rule, however, it is an asymptomatic colonization of germs (bacteriuria), which does not require treatment.

Encrusted or infected urinary catheters must be changed immediately. The preventive change of the catheter after 2 to 4 weeks should avoid complications. On the one hand, however, this is uncomfortable for the patient, and on the other hand, every catheter change brings with it the risk of injuring the urethra and introducing germs. This is why heparin-coated urinary catheters are offered that counteract bacterial colonization and incrustation. On the other hand, catheters with silver coating for reducing the infection rate are to be viewed critically, since a steadily increasing number of germs is resistant to the biocidal effect of silver.

Long-term permanent drainage over months or years can lead to a decrease in bladder capacity (shrink bladder ).

The catheters are available in different sizes from Charrière  6–30 and in lengths from 20–40 cm and are identified by a color code or by the size printed on them. Recently, special catheters for women that are only about 10 cm long and therefore not much larger than a lipstick have also become available.

Basically, a catheter may only be inserted sterile in order to avoid the spread of germs into the urinary bladder. However, this risk generally exists with urethral catheters, since germs are often located in the urethra , which are then pushed into the bladder or taken with them. In the case of permanent drainage, an increase in the local flora always leads to a generally asymptomatic colonization of the urinary bladder (bacteriuria), which does not require treatment if there are no symptoms.

With transurethral indwelling catheters, the area around the urethral orifice is first disinfected with a mucosal antiseptic, then a lubricant is inserted into the urethra. The urinary catheter is then inserted. When the catheter is securely placed in the bladder, the balloon is filled with sterile water or a special medium. The procedure for single-use catheters is the same, but there are also specially coated catheters that do not have to be separately applied with a lubricant. These are primarily intended for intermittent self-catheterization. Any manipulation of the catheter and the components may only under aseptic precautions are made. Avoid separating the bag and catheter to prevent germs from getting into the catheter.

Suprapubic urinary catheters are usually inserted with local anesthesia . The prerequisite is a urinary bladder filled with at least 200 ml, which is why this may first have to be filled in order to avoid injury to the abdominal cavity. The local anesthetic is then placed above the pubic bone. The needle is continuously advanced until urine can be aspirated. Now the catheter is pierced through a hollow needle , which in some systems is then divided and thus removed. Then fixation takes place via a suture or the balloon with a subsequent sterile bandage of the puncture site. Possible complications of the suprapubic urinary diversion are bleeding (e.g. in the urine) and an intestinal injury.

As a rule, the drainage of the urine should not be interrupted, so it must be ensured that the drainage bag is not raised above the level of the bladder. The tube must not be pinched off or the catheter blocked as shown in the illustration. However, there are also catheter valves which, in selected cases, allow a bag-free supply, with the filled urinary bladder then being emptied via the catheter as required.