Boscheln is the most south-eastern part of Übach-Palenberg in the Heinsberg district . On December 31, 2015, 4650 people lived here. At the beginning of the 1920s, a mining settlement for the neighboring built here Baesweiler lying pit Carl Alexander . 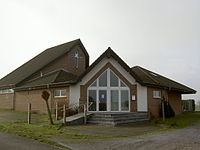 The patron saint of the Catholic Church is St. Fidelis . This church was built in 1929-30 according to plans by the Cologne architect Edmund Bolten and was part of the Übach parish as the rectorate church for the first 20 years . St. Fidelis has been an independent parish since 1951.

The Evangelical Kreuzkirche was built in 1953 and has been owned by the Evangelical Free Church Community since 2011 . Furthermore, the Apostolic Community is represented in Boscheln with a community center on Blumenstrasse and the New Apostolic Church with a church.

Boscheln has a community elementary school and an old people's home. The community secondary school was closed. The Boscheln fire fighting group, founded in 1950, is one of the four units of the Übach-Palenberg volunteer fire department .

Sports club: The local sports club VfL Boscheln has several departments. The first team of the largest division of the club, the football division, played in the national league at its best. During the turn of the millennium, the club was briefly represented in the district league again, but since then a radical decline began, so that the first team temporarily only played in the district B league. Since the 2007/08 season, VFL has been back in the district league A. VfL plays its home games on the Glück-auf-Kampfbahn in Boscheln, which has both an ash pitch and a grass pitch. There is also a Taekwondo association, whose training takes place in the sports hall of the community elementary school. In earlier times, the wrestling department was also represented, from which the VfL Boscheln association originally emerged.

Schützenverein: The St. Rochus Schützenbruderschaft Boscheln was founded in 1880 and is a registered association. It belongs to the Geilenkirchen district association in the Aachen diocesan association and is a member of the Federation of Historical German Shooting Brotherhoods (BHDS). The young shooting department has been one of the strongest youth departments in the Geilenkirchen district association for decades with over 20 students and belongs to the Bund der St. Sebastianus Schützenjugend (BdSJ), the youth association of the BHDS. The Schützenheim is located behind the Catholic Church on Roermonder Straße and is the meeting point of the association. The main event is the annual shooting festival, which always takes place on the weekend around the last Sunday in August around the shooting club. 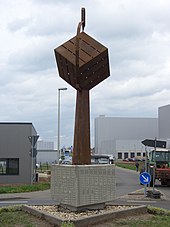 The nearest train station is Übach-Palenberg on the Aachen – Mönchengladbach line . The next junction is "Alsdorf" on the A 44 . AVV and WestVerkehr buses connect Boscheln with all other parts of the city as well as with Aachen , Alsdorf , Baesweiler , Geilenkirchen and Herzogenrath .