Until 1927, Rimburg was a municipality in the Aachen district in the Prussian Rhine province . 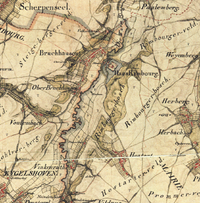 The former municipality is now part of the cities of Übach-Palenberg in the Heinsberg district and Herzogenrath in the Aachen city region .

To the north of Rimburg Castle , excavations from 1926 onwards by O. E. Mayer found the remains of a Roman vicus (whose name is unknown), a street settlement on both sides of the Roman road from Cologne to Boulogne-sur-Mer , which is now also known as Via Belgica . This settlement was on the bridge over the Wurm, on the western side there was another vicus in the area of ​​today's Dutch municipality Landgraaf . Both settlements existed between the first and fourth centuries AD and were densely populated with strip houses. They presumably served mainly to take care of the travelers. Pottery kiln, shoemaker, carpenter and a dealer in brass goods are proven, as well as a bone carver for hairpins. According to Mayer, one must imagine the vicus as a "large, flourishing village". There was a ditch and a six-meter-long wooden bridge on the Wurm lowland, the foundations of which could be secured to the west of the worm when a sewage treatment plant was being built there. The course of the Via Belgica is no longer recognizable in the Rimburg area today, as it was abandoned early west of Jülich in favor of a route from there to Aachen.

From the historical domination Rimburg which are headquartered in Castle Rimburg had been in the French period in -Inférieure Meuse the Mairie formed (mayoralty) Rimburg. Due to the demarcation established at the Congress of Vienna in 1815 , the part of the mayor's office to the west of the Wurm fell to the Netherlands and is now part of the municipality of Landgraaf in the province of Limburg . The part east of the Wurm fell to Prussia and since then has formed the mayor's office in Rimburg in the Aachen district , to which Rimburg Castle and the villages of Finkenrath, Hofstadt and Nievelstein belonged. The mayorry of Rimburg was abolished in 1857. The municipality of Rimburg has belonged to the Merkstein mayor since then . It covered an area of ​​3.24 km².