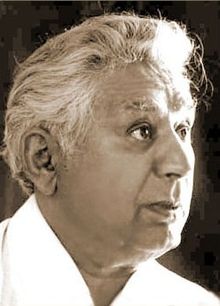 Bozorg Alavi was born Modschtaba Alavi on February 2, 1904 in Tehran . He was the third of six children. His father Abulhassan Alavi took part in the Constitutional Revolution in Iran. During the First World War, he emigrated to Berlin and became a member of the “ German-Persian Society e. V. “and together with Seyyed Hassan Taqizadeh published the newspaper Kaveh until 1922 .

Modschtaba Alavi first attended school in Tehran. In 1921, at the age of 18, he came to Berlin with his older brother Mortezā, where he attended high school and studied education. After his return to Iran in 1927, he taught German, first as a senior teacher in Shiraz , then at the trade school in Tehran. During these years he met Sadegh Hedayat , with whom he developed a good friendship and whose literary circle he belonged.

Also in the 1930s he supported Tagi Erani , the leader of the Communist Party of Iran . Alavi was one of the 53 men who were arrested in 1936 under Reza Shah Pahlavi for " communist activities" and who became known as the Group of 53 . In this context, he asserted that he had only read communist literature as a writer, but that he had not become politically active. Nevertheless, he was sentenced to 7 years in prison in 1937, but released in 1941 as part of the Anglo-Soviet invasion of Iran in World War II . After his imprisonment, he wrote the scraps of paper from the prison and 53 people .

He then continued his political activities and was co-founder of the Marxist-Leninist Tudeh Party of Iran in the year of his release from prison . In the party organ Mardom (dt. 'The people') he worked in the editorial office. For his book Nāme-hā wa Dāstān-hā-ye digar ( letters and other stories ) he received the "Golden Peace Medal " of the World Peace Council , of which he was a member. When Prime Minister Mohammad Mossadegh was overthrown in August 1953, Bozorg Alavi was in the German Democratic Republic . In 1955 he was visiting professor at the Humboldt University there. Since the Tudeh party faced massive persecution following the fall of Mossadegh, he remained in exile in the GDR until the fall of the Shah regime through the Islamic Revolution in 1979.

There he worked from around 1956/57 to 1959 as an assistant professor for Persian language and literature at the Humboldt University in Berlin and became the responsible co-founder of the Iranian Studies department there , whose chair he held from 1959 until his retirement in 1969. Together with Heinrich FJ Junker , he was best known as the author of an extensive Persian-German dictionary since 1966.

After the Islamic Revolution in 1979, Bozorg Alavi visited Iran several times for a short time and was dismayed by the development of the rule of Supreme Leader Khomeini , which, in his opinion, assumed similar repressive features as that of the Shah regime. His last visit to his home country was in 1993.

On February 16, 1997, Alavi died at 11:20 p.m. in Friedrichshain Hospital in Berlin. Alavi had ordered regarding his funeral:

“I am a Muslim and a Shiite. For this reason I want to be buried in a Muslim cemetery according to an Islamic ritual. "