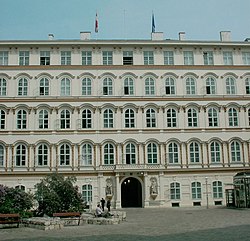 Under Foreign Minister Plassnik (see below) the ministry was renamed the Federal Ministry for European and International Affairs with effect from March 1, 2007 ( Federal Law Gazette I No. 6/2007 ) .

The BMaA or after renaming to BMEIA was responsible for:

The BMAA was divided into the following sections , groups , departments and units: