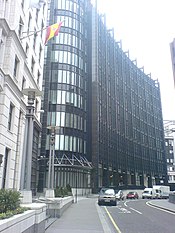 CNBC (formerly CNBC Europe ) is a business and financial news channel operated by NBCUniversal and headquartered in London , England . CNBC Europe is the European branch of the US broadcaster CNBC (Consumer News and Business Channel). The program is broadcast from London.

History of the station

CNBC Europe went on the air in March 1996. The parent company was the radio and television network NBC . In February 1998, the station merged with Dow Jones ' European news channel , European Business News (EBN). In July 2005, NBC Universal announced that it would buy back the stake in Dow Jones. Since December of that year, CNBC Europe has been wholly owned by the conglomerate again. Dow Jones will continue to deliver program content. In the course of the restructuring, the line “A Service of NBC and Dow Jones” was also dropped.

Moderators and market reporters are:

CNBC Europe produces around nine hours of live programming on weekdays. Between 1 p.m. and 5 p.m., the station shows the programs Squawk Box and Squawk On the Street from America. The channel also adopts the formats Power Lunch and Closing Bell from US CNBC. In the evenings, the station showed a shortened version of the NBC entertainment show The Tonight Show, previously hosted by Jay Leno , and the NBC Nightly News program , until the Tonight Show was replaced on February 1, 2012 by Late Night with Jimmy Fallon . The Tonight Show with Jimmy Fallon has been broadcast on weekends since February 2014 . At the weekend, programs from the entire broadcasting group are used. In the event of important events, the station also takes over the programming of the US news broadcaster MSNBC .

In the past, the European station was based on the on-air design of the American version. In September 2004, CNBC Europe deviated from it: title sequences were redesigned and stood out from the graphics of the sister station. The design of the information boards has also been completely renewed. The channel continued to take over the music from US CNBC. In September 2006, the appearance of the station was designed similar to the American channel. CNBC Europe did without new animations. Title sequences and sounds were largely retained. In January 2008, the station revised its studio design and adapted the inserts to the American and Asian models. On March 1, 2010, after some changes to the inserts and background music, the entire appearance of the station changed. In addition to a new font and completely new overlays, the new design was used in parallel in Europe and the USA on-air.

There is a broadcast from CNBC Europe for the Scandinavian countries called CNBC Nordic. The regional window has the same content as CNBC Europe, but the ticker shows the current stock market data from Scandinavia.

In addition, until the end of December 2008, CNBC Europe supplied the German news channel N24 with updates several times a day from the Frankfurt floor and in the evenings from the New York Stock Exchange .

The special case of CNBC Germany

Until the analogue ASTRA satellite frequency was switched off on January 1, 2008, CNBC Germany was broadcast on this slot (last only by the hour). Initially, the English-language teleshopping windows were replaced by equivalent long-term advertisements for the German-speaking market; A short time later, the weekend program, as with NBC Europe , ran religious programs in German or with German subtitles.

The station Das Vierte took over the previous transponder from CNBC Germany when it started broadcasting. The transponder change resulted in a shortening of the transmission time; instead of broadcasting 24 hours a day as before, CNBC Germany could be seen on weekdays from 5 a.m. to 8 p.m. and on weekends from 5 a.m. to 1 p.m. As a result, the late-night formats by Jay Leno and Conan O'Brien were broadcast in abbreviated form from 7:00 p.m. to the end of broadcasting at 8:00 p.m.

The name "CNBC Germany" was mainly communicated in teletext and on the website, where there were separate program lists. A special feature of this is that the CNBC text was not available at the time when CNBC Germany was hooked into the ongoing CNBC Europe program.

The fourth has been broadcasting the pan-European CNBC program via all distribution channels on weekdays from 5 a.m. to 10 a.m. since the analogue satellite frequency of CNBC Germany was switched off (see the article on NBC Europe ). At the beginning of 2011, this service was restricted so that only the program "Capital Connection" broadcast between 5 and 7 o'clock in Germany can be received in this way. The program "Squawk Box Europe", which was broadcast between 7 and 10 am, was replaced by the broadcast of cartoons.