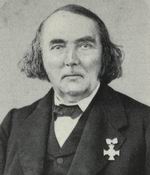 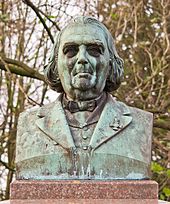 There are contradicting information about his life: he is said to have been born in the summer of 1795 or 1796 in Frankenberg or near Magdeburg, and died in 1874 or 1876. Since both Johann Christian Poggendorff in 1863 and Rudolf Wolf in 1890 both named Frankenberg as their place of birth and The city on the Eder is also considered the most likely because of its proximity to the University of Marburg .

His father Heinrich Daniel Garthe was city ​​treasurer . His mother was a daughter of the record clerk Meinhardt. He attended the Latin school in his hometown. Since his family could not finance the grammar school, he had to make up for the gaps with private tuition in order to be able to begin studying chamber sciences in Marburg in 1812 with Vice Rector Wilhelm Münscher . Through Georg Wilhelm Munke he switched to mathematics, physics and natural sciences, acquired his doctorate in philosophy on May 16, 1817 and briefly taught as a private lecturer at the University of Marburg. He was friends with Heinrich Berghaus .

From 1817 to 1831 he taught mathematics and physics at the Ernestinum Rinteln in Hesse . Friedrich Oetker and Franz von Dingelstedt were among his students .

With a telescope he made himself, he discovered two comets. In 1826 he determined the elevation of Rinteln over the sea. In 1827 he invented his “world machine”, also known as the cosmoglobus: a glass celestial globe with a wooden globe inside. In order to obtain a Prussian patent for it, he demonstrated it in Berlin with the help of his friend Alexander von Humboldt .

The era of natural sciences had dawned in Cologne and in 1825 a new type of school, the “ Higher Citizens School for Nutrition, Trade and Transport Stand ”, was founded on Quatermarkt (today Kreuzgasse). Garthe was proposed as headmaster. But since he was a Protestant, it was agreed in Catholic Cologne that Garthe should become the first senior teacher. So that he could move from Rinteln to Cologne at a suitable time, the start of school in 1831 was even moved from autumn to Easter. He taught physics and chemistry. Men like Mevissen , Hoesch, Schoeller and Suermondt were his students and owed him their scientific knowledge.

He invented the archetype of the match and the aquarium.

In 1852 he repeated Foucault's pendulum experiment in Cologne Cathedral with a 50 meter long pendulum. August Toepler assisted him . In 1852 he tested the performance of a steamship.

At his suggestion, wealthy and animal-loving citizens of the city joined together to form a stock corporation that founded the Cologne Zoological Garden on July 22nd, 1860 . He was supported by his former Rinteln students, the brothers Adolf and Wilhelm Ludwig Deichmann and Georg Osterwald . He got suggestions for the design of the system from Holland and Belgium. In addition to a memorial in the cemetery and in the zoo (erected on September 5, 1886), there is also Garthestrasse very close to the zoo. People from Cologne say “Oh, I also know why this is called the Zoolonische Gaarde”.

Garthe was buried in the Melaten cemetery in Cologne . The tomb no longer exists.