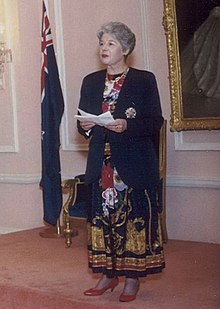 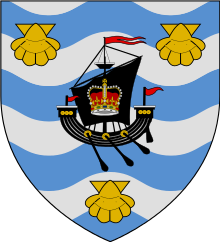 Dame Catherine Anne Tizard GCMG , GCVO , DBE , QSO (born April 4, 1931 in Auckland , New Zealand ) is a former mayor of Auckland City . She was the first woman in New Zealand to serve as governor-general, and held that office from 1990 to 1996.

Catherine Anne Maclean was born in Auckland on April 4, 1931 , the only child of the Scottish immigrants Helen and Neil Maclean . She grew up in the small town of Waharoa , near Matamata in the Waikato District , where her father, a socialist , worked as a factory worker in a dairy. Catherine attended Matamat College in Matamat and received a university scholarship in her senior year in 1948 due to her good performance. In 1949 she enrolled for a Bachelor of Arts at the University of Auckland .

At the university she met the history lecturer Bob Tizard know. She married him in 1951, left university and had four children with him. In 1980 she separated from her husband, who had cared more about his political career than about the family.

In 1961, Catherine Tizard returned to university, finished her studies in zoology, and in 1962 got a part-time position as a teacher in the university's Zoology Department , which was later converted to a full-time position. She worked in her profession for almost 20 years.

In 1971 she began her political career at the same time as she was elected to Auckland City Council (Council of the City of Auckland). She was a member of the city council until 1983, was also elected to the body of the Auckland Regional Authority in 1980 , but lost the election for mayor of Auckland, which was running at the same time .

From 1976 to 1985 she appeared in the talk shows " Beauty and the Beast " on TVNZ as Cat Tizard and gained national fame and popularity.

In 1983 she repeated her candidacy for mayor's office and was the first woman to be elected to the office of the country's largest city. She won two other mayoral elections, held in New Zealand every three years. In 1990, she gave up the office and took the her in 1989 at the suggestion of then Prime Minister Geoffrey Palmer of Queen Elizabeth II is transmitted Office of the Governor General of New Zealand on. She was also the first woman in the country to take up this position and held the position until 1996. After Elmira Minita Gordon , 1981 in Belize and Jeanne Sauvé , 1984 in Canada , she was the third woman in the British Commonwealth of Nations to become Governor General.

Cat Tizard , as it is often affectionately called, is known for its affection for jokes, gin and sometimes rough vocabulary. She knew during her tenure that her pointed tongue could get into trouble. In an interview with the New Zealand Herald before the inauguration, she promised to be aware of the dignity of the office and to behave with dignity in the future. An interview with the New Zealand Herald in 2014 entitled " Twelve Questions: Dame Catherine Tizard " gives a little insight into their choice of words and the way they speak .