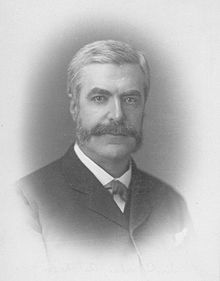 Sir Charles Umpherston Aitchison KCSI , CIE (born May 20, 1832 in Edinburgh , † February 18, 1896 in Oxford ) was a British colonial official in India whose career was promoted by the consequences of the uprising of 1857. Ultimately he rose to Foreign Secretary of the Government of India (GoI) and Lieutenant-Governor of the Punjab .

Charles Umpherston Aitchiston was the son of Hugh Aitchison. His mother came from the Umpherston family, who were prominent among the Protestant Scottish Convenanters . He attended high school and the University of Edinburgh (MA). He was particularly interested in logic and metaphysics, Fichte's The Purpose of Man influenced him strongly. He spent the summer semester of 1854 at the University of Halle with Friedrich August Tholuck , and the following winter semester he studied in Berlin. In the spring of 1855, without any special preparation, he took part in the selection test for the service of the East India Company , in which 131 applicants tried for 21 positions. Despite a poor result in mathematics, he was fifth best.

The following year he received law and Hindi instruction in London . He belonged to the first group of the so-called Competition Wallahs , those higher colonial officials who were no longer trained in Haileybury . On September 25, 1856, he landed in Calcutta. After three months he passed the exams in Persian and Hindi. He was then sent to the remote district of Hissar in the Punjab.

However, Governor John Lawrence wanted four of those trained according to the new system on his staff, so that after only one month, on May 4th, he was ordered to Lahore . In this way he escaped the massacre of 19 whites in Hissar on May 29, 1857. Nevertheless, he got caught up in the sepoy uprising . Among other things, he spent four months defending a bridge in Amritsar . He took part in the reconquest of Delhi.

As the private secretary of the Judicial Commissioner , he worked on the drafting of a criminal code for the Punjab. After his superior's promotion, he soon became Under Foreign Secretary. He took part in the tour of the Viceroy Lord Canning in 1859-60 , during which great land redistributions to the loyal princely states took place. He wrote many of the award documents and letters, which were traditionally in classic Persian, the court language of the Mughals , and read them out in the presence of the respective prince and viceroy. Together with Henry Mortimer Durand , he drafted the new policy of adoption for childless Rajas in 1861, rejecting the Doctrine of Lapse . Lawrence, viceroy since 1864, entrusted him with further tasks.

To give him experience in general administrative service, he was sent back to Punjab in 1865-68. He then returned to the Central Administration as Foreign Secretary . He was close to the assassination of the Viceroy Lord Mayo in the Andaman Islands . In office he was particularly concerned with relations with Afghanistan. He was opposed to the conservative policies of Viceroy Robert Bulwer-Lytton , which ultimately led to the Second Anglo-Afghan War .

In March 1878 he accepted the position of Chief Commissioner of British Burma, which he held until July 1880. From April 1882 to 1887 he was Lieutenant-Governor of the Punjab, the most important of the then 12 provinces of British India. His eldest daughter Beatrice Clementina († 1902) married his private secretary James Robert Dunlop Smith in 1887. Aitchison was a devout supporter of the Free Church of Scotland . As a colonial official he supported the expansion of the Christian missions. During his term of office, Panjab University was founded , which, although it also awarded degrees in classical Muslim scholarship, was also intended to bring western knowledge and methods closer to the locals. The Wards' School (for princely sons) in Ambala , founded in 1864, became the college named after him in Lahore in 1886.

Actually he wanted to retire as governor after his home leave at the end of his time, but he followed Lord Dufferin's request in April 1887 and accepted the appointment to the Supreme Council (until November 1888). At the same time he was President of the Public Service Commission , which decided on far-reaching reforms of the Indian Civil Service . At that time he became infected. He finally retired in November 1888. At first the patient lived in London, but soon afterwards he moved to the vicinity of Oxford, where he was buried in the Wolvercote cemetery.