Christian Sigmund Pfann (born October 17, 1824 in Karlsruhe , † November 30, 1885 in Stuttgart ) was a German lithographer and photographer . 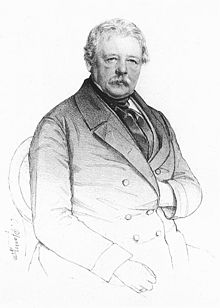 Christian Pfann was a son of the clerk from Karlsruhe, Samuel Pfann. He came to Stuttgart in 1851, where he quickly became a popular portraitist in society. By the fact itself that the Crown Prince and later King Charles I . Having had him lithographed with his wife, Princess Olga , he also won other personalities from the nobility and the upper bourgeoisie as customers. In order to secure a better social position, Pfann tried since the beginning of 1854 to be accepted into the Stuttgart artists' association “ Bergwerk ”, which focused more on socializing. After overcoming some difficulties, he was accepted on September 29, 1854 under the name "Storchschnabel". He remained a member of the “mine” for most of his life: until March 1, 1885. Pfann was Stuttgart's most popular and busiest lithographer in the 1850s. He portrayed in all circles of the population. Queen Olga valued Pfann so much that she owned a personal collection of around 200 of his portrait lithographs. Nevertheless, he did not want to close himself off to the new technology, photography. Pfann was a member of the Stuttgart Freemason Lodge Wilhelm zur rising sun .

In 1858 Pfann teamed up with the painter Theodor Widmayer and opened a joint photo studio called “Pfann & Widmayer”. At the "Exhibition for Commercial Products" in Cannstatt (September 26 to October 3, 1858), which presented images by Stuttgart photographers for the first time, the two of them were exhibiting their photographs. However, the collaboration lasted just under a year; In an advertisement dated January 5, 1859, the two announced an amicable separation and at the same time advertised their new studios. Pfann's studio has been at Rotebühlstrasse 45 since the separation .

In the years that followed, Pfann's studio was one of the best addresses in the area, and his work became known beyond Stuttgart. In 1873 he was awarded the title of “court photographer”. In addition to individual portraits and group shots, Pfann's photographic work also includes architectural studies, where his interest was primarily historical buildings. Pfann, for example, was also the author of most (30 of 50) large-format group photos that were made on the occasion of the 50th anniversary of the Katharinenstift on behalf of its pupils as a gift for Queen Olga.

After Pfann's death, Paul Hoser probably bought the furnishings in his studio from the widow. In 1888 he opened a photo studio at Königstrasse 21, which bore Pfann's name, which is proof of Pfann's reputation. From 1889 to 1892 the atelier was known as the “Photographic Atelier Paul Hoser, Pfann's Descendants”. Pfann's widow moved to Zurich in 1887 .

Pfann's early work attempted to match lithography with pencil drawing. “The portraits, mostly half-length figures, are only sketchily indicated in the lower parts in brisk and generous lines, the facial features are carried out with the greatest care. Pfann seems to have taken Kaspar Kaufmann or Ludwig Wagner , who settled in his home town of Karlsruhe, as an example. His artistic achievement is very different: In addition to the large-scale portraits, which still have something in common with the classic drawing style, there are photographically petty ones that are not even flawless in the drawing. ”Over time, his lithography shifts from the“ actual drawing technique ” in the direction of “unspiritual materialistic photo fidelity and thoughtlessness”, but not as conspicuous as with other lithographers who became photographers.