Headquarters of the CAC in Farol

The CAC is designed to fight corruption through prevention, education and investigation.

The CAC is divided into the following directorates:

In 2009 the National Parliament of East Timor passed the law creating the CAC (Law 08/2009). The Council of State elected Adérito de Jesus Soares on February 22, 2010 as the first commissioner of the CAC. His two deputies were Manuel Coutinho Bucar Corte-Real and José Samala-Rua Neves . Since December 2010 the staff is complete. The CAC has been investigating allegations against various members of the government and state institutions since February 2011. In addition, the CAC operates programs for corruption prevention, education and public relations.

Justice Minister Lúcia Lobato was sentenced to five years in prison for mismanagement in 2012 as the first member of the government in East Timor’s history . She began her detention in January 2013.

On February 25, 2013, the CAC applied for house arrest for the former Minister of Education, João Câncio Freitas . He is accused of abuse of power and economic participation in a television education program. 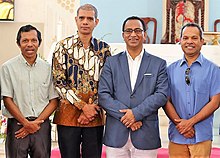