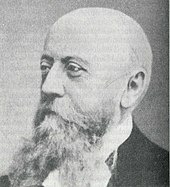 Curt von Knobelsdorff (born January 31, 1839 in Berlin ; † January 24, 1904 there ) was a Prussian officer with the rank of lieutenant colonel and a pioneer of the Blue Cross .

He came from the Uradelsgeschlecht of Knobelsdorff . His parents were Lieutenant General Alexander Friedrich Adolf von Knobelsdorff (1788–1848) and his third wife Auguste, born von Beust (* July 19, 1810, † May 12, 1887)

Since 1850 he was part of the Potsdam Cadet Corps . The marriage followed in 1866 in the German War and in 1870/71 in the war against France . In 1877 he began to attend events of the Blue Cross regularly and turned to Christianity, which initially meant no change for his life. It was not until the 1880 meeting with Dr. Frederick W. Baedeker (1823–1906) - a cousin of the well-known publisher of travel guides - brought him to a 19-month ban on alcohol and tobacco.

In 1882 he was transferred to Königsberg because he, who had been the casino director in Mainz since 1872, did not take part in parties with alcohol. This resulted in a relapse into excessive drinking in 1883. In February 1884 he was transferred to Memel . On July 5, 1887, Knobelsdorff then experienced his total collapse and reported on July 9, 1887 in the military hospital in Breslau . It was a surrender to the alcohol and the resolution to finally be able to drink in a controlled manner. In the autumn of that year he wrote to Bern , where the headquarters of the Blue Cross for the German-speaking area was located and where Arnold Bovet also worked, and asked to join the association. In December 1887, he finally retired from military service at the same time as his promotion to lieutenant colonel .

In the same year he began an eight-month missionary training at the school of the pilgrim mission St. Chrischona near Basel . In August 1888, von Knobelsdorff was finally consecrated and sent to Berlin to serve at the Blue Cross. In the first quarter of the year, three groups were founded, but they were nonetheless hostile. Abstinence was widely seen as an exaggeration.

In the years that followed, Curt von Knobelsdorff became the most important ambassador of the Blue Cross, who undertook “agitation trips” throughout almost the entire German Empire , Switzerland and North America. He worked closely with the Evangelical Alliance . He was in charge of the Blankenburg Alliance Conference for a time and was a regular speaker at the Tersteegensruh Conferences in Mülheim an der Ruhr .

Curt von Knobelsdorff's grave at the Columbiadamm cemetery in Berlin

He found his final resting place in the Columbiadamm cemetery in Field N 15, Wall, GA. His grave was dedicated to the city of Berlin from 1990 to 2014 .