from Wikipedia, the free encyclopedia
This is the spotted version , flagged on July 12, 2019 . There are still template and file changes that need to be viewed. 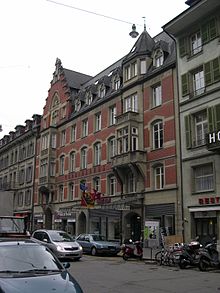 The club house on Zeughausgasse

Arnold Bovet (born January 19, 1843 in Boudry , † May 11, 1903 in Bern ) was a free church pastor of the French branch of the Free Evangelical Congregation in Bern in Switzerland and a pioneer of the Blue Cross .

He was married to Nannette Bovet-Bernus (1845–1925) from Frankfurt am Main , who came from a Huguenot family. He grew up as the son of a factory owner in French-speaking Switzerland . He and his wife had a religious revival in 1874 at the Oxford Sanctification Movement Conference .

He was not only a revival preacher, but also looked after the drinkers in the Bernese area in an exemplary manner and built the clubhouse on Zeughausgasse in Bern. His work bore fruit, and by 1900 there were 75 Blue Cross clubs in the canton of Bern .

He was in contact with Curt von Knobelsdorff and worked among the Italian guest workers on the construction of the Lötschberg tunnel . One of his most important employees was the teacher at the Bärenhöfli, Johanna Meyer , who wrote many lyrics for him. He was a contemporary and colleague of Franz Eugen Schlachter .

From 1902 to 1903 Bovet was a member of the committee of the Evangelical Society of the Canton of Bern .