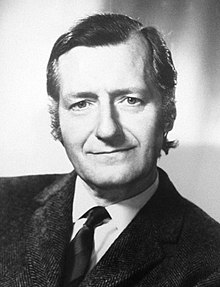 David Hedley Ennals was the second son of Arthur Ford Ennals and his wife Jessie Edith Taylor. He visited the location in his hometown Walsall Queen Mary's Grammar School and in the context of a one-year student exchange program in the US city Windsor located Loomis Institute . In 1939 he was a reporter for the Walsall Observer and served in the Royal Armored Corps of the British Army during World War II . In 1942 he was transferred to the 3rd Reconnaissance Corps. He provided services in North Africa, Italy and at the Rhine crossing. During the Allied landing in Normandy in June 1944, he did not return during a night patrol and had to live in captivity for months. With the rank of lieutenant, he retired from military service.

In the British general election of 1950 and 1951 , David Ennals ran unsuccessfully as a Liberal candidate for Richmond (Surrey). He later joined the Labor Party and served as Secretary of the Foreign Affairs Division of Labor Headquarters.

Ennals was then elected MP for Dover in the 1964 elections. Prime Minister Harold Wilson named Ennals as Secretary of State for the Army after the 1966 elections . In 1967 Ennals became State Secretary in the Interior Ministry under James Callaghan and the following year State Secretary for Social Affairs, but lost his government post and parliamentary seat after the Labor Party was defeated in the 1970 elections .

After the February 1974 elections , Ennals returned to the House of Commons as representative of Norwich North and was appointed Secretary of State for Foreign and Commonwealth Affairs. In 1976 he took over the post of minister for social affairs and carried it out until Labor lost power in the 1979 elections . During his tenure, he commissioned Sir Douglas Black with the creation of the Black Report - published only in 1980 - on the socially determined inequality of health opportunities . After losing his seat in parliament again in the 1983 elections , he was raised to life peer at the instigation of Prime Minister Margaret Thatcher as Baron Ennals, of Norwich in the County of Norfolk .

Following his departure from the House of Commons in 1970, David Ennals served as campaign manager for the National Association for Mental Health (MIND), which he held until 1973. He became its chairman in 1984 and served as president from 1989 to 1995.

From 1952 to 1957 Ennals served as secretary of the United Nations Association and in 1984 became its chairman as well as the chairman of the Gandhi Foundation , which office he held until 1995.

David Ennals' younger brother Martin Ennals was a human rights activist and Secretary General of Amnesty International . His son Paul Ennals was the managing director of the English child welfare organization National Children's Bureau from 1998 to 2011 .