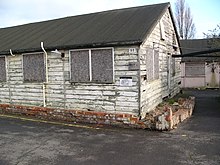 The legendary "Hut 6" (photo from 2004) in Bletchley Park, where David Rees worked on the deciphering of the German ENIGMA under the direction of Gordon Welchman .

Rees graduated from Cambridge University . During the Second World War he was involved in the successful deciphering of the German ENIGMA rotor key machine as a “codebreaker” in Bletchley Park, England, in “Hut 6” (German: Baracke 6) . Rees was later a professor at the University of Exeter . In commutative algebra, he is best known for working with Douglas Northcott in 1954. The Artin-Rees Lemma is connected with his name.

In 1993 he received the Pólya Prize . He was an Honorary Fellow of Downing College, Cambridge University. In August 1998, a conference was held at Exeter University to mark his 80th birthday. He was married to the mathematician Joan Rees (lecturer at the University of Exeter). His daughter Mary Rees (* 1953) is a professor of mathematics at Liverpool University , specializing in complex dynamics. Michael Drazin (Cambridge 1953) was one of his doctoral students .