The chimney sweep or The indispensable traitors of their masters out of self-interest is a musical comedy in three acts by Antonio Salieri from 1781 . The text comes from the Viennese doctor Leopold Auenbrugger , whose daughters Marianne and Franziska were Salieri's students.

The musical comedy was the thirtieth April 1781 in the Burgtheater in Vienna premiered . It also appeared on the stage under the title The punished Brittle or The crafty chimney sweep .

It is remarkable how confident the Italian-born composer was able to use the German language. According to an anecdote, the setting of the libretto as a "language exercise" is said to have been personally commissioned by Emperor Joseph II . The delightfully orchestrated score surprises with a multitude of different musical forms, from simple songs to (parodied) melodrama; What is remarkable is the virtuosity with which Salieri mixes these forms in order to balance the somewhat simple-minded text with a clever musical dramaturgy.

Although the libretto has been heavily criticized, the opera large audiences, most especially the distinctive music and the exquisite cast was due to (u. A. With Catarina Cavalieri and Ludwig Fischer , both in 1782 and in the premiere of Wolfgang Amadeus Mozart's The Abduction from the Seraglio occurred ). The General Theater Almanach of 1782 regrets "the excellent Salieri [...] that he had to waste his beautiful talent on such a mess ". Elsewhere, for example in Berlin in 1783, attempts were made to underlay the music with a new, better text, but the piece was nevertheless not able to stay on the stage permanently. Leopold Mozart even considered the piece to be an Italian opera buffa that was poorly translated into German .

The distinctly Mozartian gesture of the music is striking; numerous numbers anticipate works by Mozart that later became so famous, such as the beginning of the overture to Le nozze di Figaro . The bravura aria Wenn dem Adler the plumage of Fraulein Nannette in the third act can be seen as a direct model for the aria of Konstanze Martern all kinds in Die Entführung aus dem Serail . From a letter to his father dated December 10, 1783, it emerges that Mozart bought a score by the chimney sweep for six ducats. Later he tried to get a printed libretto for the piece, as can be seen from another letter.

In the course of a slowly beginning renaissance of Salieri's works, parts from the chimney sweep were also performed again in the recent past , including a. in January 2007 the overture and the coloratura aria of Nannette with the soprano Eleonore Marguerre and the Mannheim Mozart Orchestra under the baton of Thomas Fey . For her solo album, released in November 2007, the German coloratura soprano Diana Damrau also recorded an aria from the Rauchfangkehrer , the distorted and parodied opera seria aria of Nannette Basta vincesti… Ah non lascarmi no , but without Salieri's composed heckling by the fictitious "singing teacher" Volpino , who corrected the singer's incorrect pronunciation in the scene. As part of the Walldorfer Musiktage festival, excerpts from the work were presented in concert in October 2010; The soprano Berit Barfred Jensen and the bassist Philipp Topf sang under the direction of Timo Jouko Herrmann , accompanied by the Karlsruhe Baroque Orchestra. On November 14th, 2011 in the Graz Minoritensaal a greatly abbreviated new performance of the opera with young Graz artists and singers (mostly students), initiated by the Graz pharmacist Mag. Christian Müller, took place, which was very well received by the audience. Furthermore, a recording of the opera is to be made in this context. The occasion for this campaign was the 300th anniversary of the Mohrenapotheke (on Südtirolerplatz), in the neighboring building of which Leopold Auenbrugger , the librettist of the Singspiel, once grew up. An almost unabridged staged revival of the opera - albeit in English - brought the Pinchgut Opera on stage in Sydney / Australia in July 2014 under the musical direction of Erin Helyard; Directed by Mark Gaal. 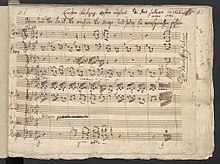