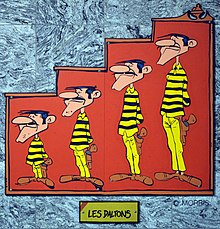 The Daltons: Joe, William, Jack and Averell (from left)

The Daltons are characters from the Lucky Luke comic book series by Maurice de Bevere (Morris) and René Goscinny . The criminal gang consisting of the four brothers Joe, William, Jack and Averell Dalton is modeled after the historical Dalton brothers . In the Lucky Luke album nepotism (Les Cousins ​​Dalton) the Daltons are introduced as cousins ​​of the historic Bob, Grat, Bill and Emmett Dalton.

History of the characters

The Daltons first appeared in nepotism in a Lucky Luke comic in 1952 . In volume 81 of the series called The Outlaws , Morris tells of the encounter between the historic Daltons and the later adversary of their cousins. Visually, these Daltons did not differ in the slightest from their later successors. Luke is involved when they appear to perish during the historic Coffeyville heist. Later, however, he has to deal with her cousins. The Daltons are still represented in the series to this day, which did not change after Achdé took over the drawings after Morris' death.

Role and appearance of the Daltons

The Daltons act as typical villains in the Lucky Luke series and often carry out the main conflict with the cowboy. This is clearly superior to them, so that the crooks also take on the role of the humorous clumsy. Another aspect of their characters is the constant conflict among the brothers, especially between Joe and the goofy Averell. This often results in the Daltons defeating themselves in the first place. A running gag is Joe's constant attempt to make Lucky Luke his servant instead of killing him or forcing him to rob a bank or the like.

Often times, the stories begin with the four of them breaking out of prison and having Luke put them behind bars.

The Dalton brothers are of different sizes, with the difference being about one head each. Most of the time they appear in a row according to size, next to one another or one behind the other, regardless of whether they are running, riding or moving around. They mostly wear the same clothes, either black and yellow striped convict clothes or black pants and green or blue shirts with cowboy hats. Their faces are identical. As children, they were blue and bald, save for one large curl of lard. Sometimes they also make the same movements.

The texts, such as quotes from the Daltons themselves or other characters, show that they are dangerous, notorious criminals. Often their name is enough to spread fear and terror or to drive people to flight in droves (Daisy Town). Nevertheless, in the stories they hardly succeed in a more serious crime in which they enrich themselves significantly or harm people. This is only reported in narrative texts or often in newspaper articles (nepotism, The Daltons break out). After outbreaks, they can usually successfully provide for themselves through criminal means only with the necessary equipment such as clothing, weapons, horses and the like.

Joe, the smallest and oldest (except for nepotism ; here he is the youngest) of the Daltons, is the leader of the gang. He's a choleric and prone to tantrums , often triggered by the mere thought of Lucky Luke or stupid comments from his brother Averell. Joe hates Rantanplan, the stupid and voracious prison dog, to which he is occasionally chained so that Rantanplan can "guard" him. The guard then tends to mistake Joe's tantrums for affection, which infuriates the bandits even more. If he then takes out his anger on the dog, it usually comes to a fight with the prison guards. Joe's greatest weakness is his mother. He can't stand the fact that she prefers the baby Averell to him and doesn't hesitate to put Joe, the “most feared bandit in the West”, over his knee.

The author Goscinny has always called Joe the dumbest of the brothers, although he now forges almost all the plans in the series and seems to be the most intelligent of the brothers. In the brothers' first album, nepotism , you can see this even more precisely: While his brothers each have a skill that makes them at least equal to Lucky Luke, Joe is only guided by "pure hatred". In this first volume he is also clearly rash, naive and gullible, so that Goscinny's statement can be better understood. Joe's transformation into a choleric leader did not follow until later volumes.

William and Jack, who are between Joe and Averell in size, age, and intelligence, play less important roles. With a few exceptions, they don't have such clearly defined personalities and so only follow Joe's instructions or prevent Joe from strangling Averell. They became stopgaps, which can go quite a long way: When the Daltons split up in the last volume that Morris completed, A Wild West Legend , they split not into four groups, but into three: Joe, Averell - and Jack / William.

William is usually the smaller of the two characters. Every now and then, however, they change their sizes - interestingly, when, as in the second part of Nepotism or in Dalton City , they act as independent characters instead of stopgaps.

The second smallest Dalton is usually called William. He is shown in nepotism (where he is the second largest here) as a master of cunning and disguise, which at least doesn't work with Lucky Luke. In Dalton City (where he is again the second largest) it turns out that he is the only one of the brothers who has something to counter Joe's outbursts of anger and is more or less equal to the older brother. In the story, jealousy, jealousy and also taunts come to light between the two. His prison number is 27 and he has been to 35 prisons.

Jack is the second tallest of the Daltons. According to nepotism , he is the brothers' best shooter, but he is also not averse to gambling - especially Russian roulette . Furthermore, he is not very drinkable, which is his undoing as Lucky Luke's bodyguard in Dalton City . He is passionate about playing the banjo , which is why he likes to let it go with train robberies ( The Daltons take the train ).

Averell, the greatest Dalton, is also the dumbest of the brothers. His voracity connects him with Rantanplan, the prison dog. Averell's favorite phrase is “When is there something to eat?”, Which he often uses to drive his brother Joe to white heat. He knows that he is stupid (or a "dork"; see The Daltons in the Blizzard [Les Dalton dans le Blizzard] ), but considers himself the most beautiful of the Daltons. Basically, Averell is very good-natured and is not a desperado of his own will , but he cannot escape the influence of his brothers.

As the youngest he is the darling of Ma Dalton, and in contrast to his brothers, he has an honest side, which always becomes the doom of the Daltons when Lucky Luke manages to play this fact skillfully. In Amnesia (L'amnésie des Dalton), for example, the Daltons stage a trial against Lucky Luke and give him Averell as defense attorney, who delivers a brilliant defense speech. In The Daltons and the Psycho-Doc (La guérison des Dalton) , Averell, spurred on by Lucky Luke, no longer wants to be a bandit and tries to convert his brothers too. Occasionally, the other brothers get into trouble because they don't listen to Averell. In The Daltons in the Blizzard, it is he who wants to tell the brothers that they left the guns in a sleigh. In Tortillas for the Daltons (Tortillas pour les Dalton) , Joe made a mistake with Averell, so that he does not tell the rest of the brothers that an alleged large landowner who was kidnapped is Lucky Luke.

In the first volume of the Daltons, nepotism , Averell is still portrayed as bumbling, but quite competent. So he is equal to Lucky Luke in strength and willpower, the two fight each other extensively and devastate a saloon without one of the two emerging as the winner in the end. It is only in later volumes that Averell becomes the fool he is known as. But he remains a very good boxer , for example in The Daltons in the Blizzard .

Relatives of the Daltons appear in some stories:

Since it is no longer the historical Daltons, draftsmen and copywriters were given significantly more leeway for creating the stories. So they don't have to follow historical time sequences. Play some stories with the cousins ​​before the real Dalton brothers were born. In addition, in the story Oklahoma Jim , they meet the adversary Lucky Luke in their childhood.

With the exception of Averell, all three Dalton brothers are dissatisfied with their better half and abandon them at the end of the adventure.

The Dalton brothers appear in the following Lucky Luke albums (numbering after publication by Ehapa Verlag):

The Daltons in the movie

The Daltons appeared in the animated series from 1983 to 1992 as well as in the three cartoons Lucky Luke - Daisy Town , Lucky Luke - His greatest trick and Lucky Luke - The great adventure .

The Daltons appeared regularly in the following cartoon series, which was still strongly based on the actions of the comic books. Notably, The Outlaws story was rewritten to be about the cousins, not the "real" Daltons.

In the first feature film, Lucky Luke , they are portrayed by Ron Carey (Joe), Dominic Barto (William), Bo Greigh (Jack) and Fritz Sperberg (Averell, consistently written as "Averill"), as well as in the following television series , where they appear in four Episodes show up. Since it is a feature film with four actors, both the same appearance and the different sizes could hardly be implemented.

The main roles play the Daltons in the movie The Daltons against Lucky Luke ; here they are played by Éric Judor (Joe), Romain Berger (William), Saïd Serrari (Jack) and Ramzy Bédia (Averell). Jack is the bigger of the middle brothers.

The television series Lucky Luke - The New Adventures also shows the Daltons regularly. Both the sizes and the voices of Jack and William (originally the same speaker) are regularly mixed up.

In the animated film On to the West , the Daltons appear, although they are California or Death! do not occur.

The latest film to date, Lucky Luke by James Huth, is the only film adaptation of the comic book adventure without the Daltons.

Xilam Animations , who have already produced The New Adventures and Off to the West , announced a Les Dalton animation series in 2009 . This ran on Canal + and France 3 from autumn 2010 and contains 78 episodes of 7 minutes each. Lucky Luke does not appear. Again, the order of the brothers is Joe, Jack, William, Averell.

Other comments and inconsistencies