Model of the Toompea

The Domberg is the most famous of the seven hills of Bamberg and also the longest inhabited part of the city, because 3000 years ago there was a Bronze Age settlement on the mountain .

Toompea has been continuously inhabited at least since AD ​​600. The first documentary mention of Bamberg from the year 902 referred to the Castrum Babenberch on the later Domberg. The city takes its name from this Babenberch and the Babenberg dynasty is also derived from it.

During the Third Reich , ceremonies were held on the Cathedral Square.

After the Second World War , the Domplatz was Bamberg's largest parking lot for several decades , until cars and buses were banned from Domplatz in the 1980s.

The Domplatz was called Hofplatz or Burgplatz until secularization . Only the small area in front of the Kapitelhaus was called Domplatz. Then the new Bavarian rulers named the entire area in honor of the then (Protestant) Queen Karoline Karolinenplatz . It was not until the end of the Second World War that the name Domplatz gradually became common and became the official name in 1949.

The slope of the square only arose as a result of the lowering of the level of the Domplatz in the years 1777 and 1778, which made stairs to the portals necessary. This lowering of the level was necessary in order to create direct access to Bamberg city center. Before that, the gate at the so-called “gateman” was the only access to the Domberg. For the two new approaches from the east, two Canon Curia had to give way. In its place, a wall has formed the east end of the Domplatz. In 1777, parts of the old court were demolished, including the Andreas chapel at the interface with the cathedral, which thus lost its connection with the court.

The Bamberg Cathedral in 1880

The ensemble around the Domplatz is interesting from a cultural and historical point of view , as four architectural styles can be seen from here : 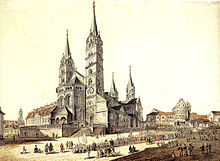 Bamberg Cathedral , part of the Domplatz and old court , 1819

The Bamberg Cathedral of St. Peter and St. Georg (Domplatz 2) is one of the German imperial domes and, with its four towers, is the dominant building in Bamberg's old town.

Inside are the Bamberg rider , the imperial grave of the only canonized imperial couple ( Heinrich II. And Kunigunde ) of the Holy Roman Empire from the workshop of Tilman Riemenschneider , as well as the only papal grave ( Clement II ) north of the Alps.

The Bamberg Diocesan Museum is located towards the southeast, directly next to the cathedral (Domplatz 5).

The apartments of the cathedral capitals and other clerical dignitaries are located in the canons' courts.

The old court (Domplatz 7) served in the past as a chancellery, library and council chamber. Today the historical museum of the city of Bamberg is located there. In summer, the Calderon Festival takes place in the courtyard as open-air performances.

The New Residence (Domplatz 8) was the former official residence of the Bamberg prince-bishops. Today it houses the Bamberg State Library and the State Gallery, a branch gallery of the Bavarian State Painting Collections. One of the most famous paintings in the collection is Hans Baldung Grien's painting The Deluge .

From the rose garden of the Neue Residenz you have a view of the Michaelskirche and the roofs of the town.

The residence of the Archbishop of Bamberg (Obere Karolinenstrasse 5) is the headquarters of the Archdiocese of Bamberg , which also includes the suffragan dioceses of Eichstätt , Speyer and Würzburg .

The current Archbishop of Bamberg , Ludwig Schick , also resides there .

Tattermannsäule not visible behind the eastern cathedral towers. In the middle of the Domberg a fountain.

The location of the Tattermann column is marked by a negative column, which is set into the earth in the form of a house in hollowed out granite.

On the Domplatz there was a slender column with a figure that was popularly called "Tattermann" and, according to legend , was the center of the empire (Latin: umbilicus imperii ) determined by Emperor Heinrich II , as Bamberg was his favorite residence. The perpetrator was probably a badly weathered figure of Christ, possibly representing the man of suffering . This column, of which Johann Georg Kaufmann had made a drawing two years earlier, was demolished on January 3, 1779 because it was dilapidated. The column had a height of 8.42 meters, of which the figure of the blessing Christ was 1.74 meters.

There are various speculations about the name Tattermann :

For the millennium of the diocese in 2007, the so-called “ navel of the world ” (which is deepened in Domplatz, near the cathedral) was built by the Israeli artist Micha Ullman in cooperation with Villa Concordia . It is supposed to remind of the location of the Tattermannsäule, and thus also of its task to mark the center of the empire.

This memorial to the former Prince-Bishop Franz Ludwig von Erthal (1779 to 1795), which stood in front of the New Chancellery of the Old Court, was dismantled in 1936, moved to today's Synagogenplatz in 1958 in front of the building of the General Local Health Insurance Fund (AOK) and moved with the AOK and its new building moved to Pödeldorfer Strasse around 1982 .

Monument to Luitpold of Bavaria

In October 1899, as was customary in the 19th century, a monument to the ruling ruler was erected on the cathedral square. The equestrian statue of the Bavarian Prince Regent Luitpold (1886 to 1912) below the cathedral wreath did not stay there very long, however, later it eke out a long shadowy existence in a depot and is now on Schönleinsplatz in downtown Bamberg. There it has already misled many tourists who thought this equestrian statue was the famous Bamberg rider .