This article describes the forced, mostly temporary admission of soldiers, especially in the event of war and troops passing through. The permanent accommodation of the standing army in private houses, often on a voluntary basis on the part of the neighborhood donors, is known as citizens' quarters .

Under billeting , mostly in case of war, you understand, as opposed to house military personnel in barracks or in civil quarters , assigning and recording in quarters. These accommodations are civil living areas that are requisitioned from citizens by military personnel due to legal ordinances or unlawful confiscation . The word is also used colloquially for the billeted soldiers themselves or for voluntarily provided sleeping places for guests at major events such as church days or Catholic days . 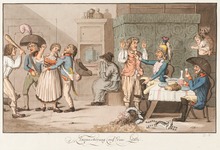 Billing in the Hotel Goldene Sonne, Meißen, hall in the war year 1915

Billing is one of the objects of public law that has taken a very different direction over time. The older constitutional law assumed that it was the duty of the subjects to give shelter to the warriors who were paid for by the sovereign on marches and in winter. In France it appeared under Louis XII. 1514 an ordinance and under Louis XIV. 1665 an ordinance , in which the lodging and catering conditions are regulated. The Great Elector of Brandenburg also issued an edict on this. During the French Revolution, however, the law of July 8, 1791, in view of the standing garrisons, completely abolished this obligation on citizens and restricted it to the troops on the march. The freedom of billeting for the nobility and other classes was also abolished.

In Germany, these conditions were very complicated due to the dual sovereignty of the emperor and the empire and the sovereigns, as well as the special duties of the imperial cities towards the emperor. They became even more so when Wallenstein used the system of requisitions during the Thirty Years' War , with the help of which he supplied his army at the expense not only of the enemy countries, but also of the emperor's allies. As a result of the complaints, care was taken against these burdens on the imperial states in the Peace of Prague of 1635, the Peace of Westphalia of 1648 and the election surrender of 1658.

The billeting system reappeared during the Seven Years' War , but it became more important when, through the coalitions against France, French armies gradually flooded all German states and demanded their full maintenance and sometimes even more from them, in hostile and allied states. People had got used to seeing billeting as a real burden resting on the houses , and they remained true to this principle when the costly catering for foreign soldiers was added to those simple services.

In the German Reich, after all, most of the troops were barracked , and billeting was not necessary for them. Where standing troops were not barracked, they were rented at state expense, but not billeted to the detriment of the individual. According to the Reich Law of August 3, 1878, the amount of the compensation was based on the rank of the billeted and the descending classes of the localities (Berlin and five other classes). For example, Berlin for the generals in the winter month 127.80 marks, in the summer month 91.20 marks, in one place 5th grade 57.90 marks and 41.10 marks; for a sergeant, 24.60 marks and 17.40 marks or 10.20 marks and 7.50 marks. For each place it was determined which class it belonged to. A revision took place every five years.

In today's Federal Republic of Germany , billeting in the event of a defense is regulated by the Federal Services Act (BLG).

In the 3rd Amendment to the Constitution of the United States , billeting was regulated after the British Quartering Act obliged American colonists to accommodate and care for British soldiers.

According to the older legal customs, billeting consisted only in giving up the apartment and the common soldiers participating in lighting and firing the household. Quartermakers (Fouriere) usually preceded their unit ( company , battalion , etc.) a day's march in order to arrange the accommodation of the troops with the local authorities and to check the suitability of the quarters. The advancing troops received billets on the individual houses and were fed either by the hosts or by the delivery of food by the unit. The abbreviated procedure consisted of transferring local sections to individual units and of streets and houses to their individual departments.

In France, during the Huguenot Wars of the 17th century, the term dreaded dragonades was coined.