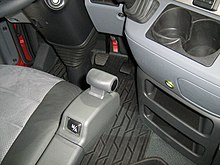 An electropneumatic gearshift (EPS) ( electronic power shift , from 1996 Telligent gearshift ) is a semi-automatic transmission control of vehicles of the Mercedes-Benz brand , which optimizes the driver's shift request with the help of a pneumatic actuator in the transmission. It is used almost exclusively in heavy commercial vehicles.

An electropneumatic circuit usually consists of the following main components:

This switching system was presented in autumn 1985 at the 51st IAA in the then NG series as well as in the O 303 long-distance coach , after the Swedish commercial vehicle manufacturer Scania was the first European manufacturer to introduce a computer-aided switching system under the designation CAG (abbreviation for Computer Aided Gearshift ). The EPS was offered as standard in long-haul trucks of the higher performance class. In the other performance classes, construction site vehicles and in buses, it was initially either subject to a surcharge or not available at all. Building on the first semi-automated EPS was followed in 1996 with introduction of the first Actros series the "Telligent" circuit ( portmanteau of " telematics " and " Intelligent "), first as a semi and later as a fully automatic circuit.

In addition to Mercedes-Benz with its own transmission production, ZF, as a manufacturer of truck transmissions, for example. B. for MAN , at the same time semi-automatic switching aids under the designation AVS (abbreviation for automatic preselection circuit), which could be operated via push buttons, gear knob or a rocker switch on the steering wheel. In terms of handling, however, all the initial systems are largely identical: the driver gives a switching impulse via a switch, which is implemented by the electronics and pneumatic actuating cylinders. In the meantime, people have moved on to relieve the driver of all switching work.

Seligent gearshift lever in a Mercedes Actros from 2002

With the EPS or Telligent gearshift, the shift request is made electronically via a selector lever and an associated bus system, e.g. B. CAN bus transmitted to the transmission control. The control only implements the shift request if the speed of the vehicle is in the range assigned to the selected gear. If the selected gear does not correspond to the accepted speed range, the transmission shifts into neutral, i.e. into neutral, and generates a rattling sound as a warning tone. The driver can then choose a different, suitable gear. This eliminates the risk of shifting into too low a gear, which would cause damage if the engine speed is too high. However, this can be disadvantageous if the driver selects a wrong gear because he needs more power and the electronics switch to neutral instead, and no power transmission takes place at all.

Instead of a conventional shift lever with an H-shaped shift gate , the driver has a joystick- like tip switch that can be moved back and forth with just a tap. This gear lever also has a neutral button and a function button for engaging reverse gear. The gear knob itself jumps back into its original position after each actuation. A display in the dashboard shows the gear engaged and the preselected gear with digits. Half aisles (split) are represented by arrows below or above the number and operated as usual with the half-aisle rocker below the knob (switch up / down).

There are design-related differences in operation: in the first version of the EPS, the gear knob was operated at the same time as the clutch. When upshifting a gear, the knob was pushed forward, when downshifting it was pushed back and held in place until the gear change was completed. The shift knob gave then with an audible click in the movement. In the later versions, the driver selected a gear before departure by tapping the knob forwards, whereby a maximum of one gear could be skipped depending on the engine speed and speed. The display shows the currently engaged gear (e.g. "N" for neutral) and next to it with a smaller number the z. B. preselected 2nd gear flashing. The gear change is carried out by actuating the clutch and this is signaled to the driver acoustically by a click in the switch box. In the past, with the exception of idling and reverse gear, the electronics did not always accept shift requests with the clutch engaged, but this is no longer the case with the Actros. The idle is engaged by pressing a push button on the right of the gear knob, the reverse gear by pressing a push button on the left with simultaneous pushing back of the gear knob. These older versions are partially automated . In the fully automated version there is no longer a clutch pedal, it is folded away in the footwell and can be used as an option. Since the electronics completely control all shifting and clutching processes, unsynchronized dog gears can be used here, which are lighter and more compact in terms of their design and can be shifted faster in operation.

With today's transmissions, the driver has two operating modes: when driving forwards, the transmission shifts the gears automatically, but there is always the option of manual intervention in the shifting process. The Sprintshift transmission for the Mercedes-Benz Sprinter , which is also an automated manual transmission, is an identical modification of the EPS / Telligent gearshift .

The Telligent electro-pneumatic circuit of the Unimog U 500 , with its up to 24 bidirectional gear steps, enables a vehicle speed of between 0.13 km / h in crawling gear and 80 km / h as the maximum permitted speed in both directions.

Advantages : Protection of the drive components and increased cost-effectiveness through optimized shifting processes, mechanical wear is minimized because the electronics control all movement processes in the transmission and do not allow shifting requests that damage the drive. The driver is relieved with automatic operation.

Disadvantages : The principle of “first preselect, then clutch” in the partially automated operation of older or simplified transmissions requires a certain amount of practice, especially for drivers who have been driving conventional manual transmissions for years or decades. Since a normal gearbox with an H gate usually has odd gears in the front and even gears in the back, this can also lead to incorrect operation of the EPS if you want to shift up to 4th or 6th gear by pulling back the lever. In particular, there is a risk that:

In the early days, the majority of truck drivers ridiculed all shifting aids as "not male", and in some cases even rejected them. In the meantime, however, these systems have become commonplace and are now also available in medium and lower weight classes.

In July 1987 there was a serious tanker truck accident in Herborn, Hesse, due to a brake failure. The tanker truck that crashed was equipped with EPS, which was still new at the time, was produced from 1985 and at that time was still very fault-prone. The driver stated that he was no longer able to downshift on the eight percent incline into the village and thus could use the braking effect of the engine, as the EPS refused to attempt to downshift in the overspeed range. In the opinion of the public prosecutor, however, the primary cause of this disaster was defective brakes and poor maintenance on the tank trailer. As the court later found, this was also known to those involved in the company or to the entrepreneur, workshop and driver, but the vehicle was still driven.