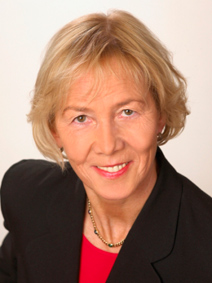 Elisabeth Liesel Koschorreck (born March 17, 1952 in Düren ; born Elisabeth Remenga ) politician ( SPD ). She was a member of the North Rhine-Westphalia state parliament until May 31, 2017 .

She grew up in Rommelsheim and Binsfeld . Liesel Koschorreck reached secondary school at the St. Angela Realschule in Düren . Then she attended the commercial school and graduated as an IHK-certified secretary . This was followed by training as a paralegal and subsequent work in this profession.

She is married to the SPD politician Peter Koschorreck from Düren and has one daughter. Today she lives in Birkesdorf . There she is also a member of the district committee .

In addition to her political activities, she campaigns for the next generation of carnival enthusiasts in the “Youth in the Bütt” working group, which she co-founded.

In 1982 she joined the SPD. From 2005 to 2010 she was a member of the state parliament of North Rhine-Westphalia. She moved up for Ilse Brusis . One of the main topics of her work was the interaction between young and old. She supported the Federal Government's “Multi-Generation Houses Action Program”. On October 23, 2015, she moved up again in the state parliament for Thomas Eiskirch via the state list .

Since 1987 Koschorreck has been deputy district administrator in the Düren district . As a district council member (since 1986), Koschorreck has been chairwoman of the Düren district's social and health committee since 1997 and chairwoman of the city ​​party since March 2011. At the beginning of May 2013, Koschorreck was nominated by her party as a candidate for mayor of Düren for the 2015 local elections. In the election on September 13, 2015, she lost 29.98% of the vote. Paul Larue received 64.00% and Bernd Essler (AfD) 6.02% of the votes.

On September 30, 2012, she was elected to the state executive committee of the SPD NRW for two years. Since June 11, 2014 she has been the deputy honorary mayor of Düren.