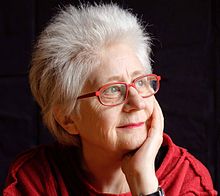 Claudia Erdheim is the daughter of the psychoanalyst Tea Genner-Erdheim and the politician Laurenz Genner . She completed a degree in philosophy at the universities of Vienna , Munich and Kiel and earned her doctorate in philosophy on a topic from type logic in 1985. After teaching positions at the Universities of Kiel and Hamburg, she worked from 1984 to 2005 as a university lecturer for logic at the Institute for Philosophy in Vienna, where she lives as a freelance writer .

Claudia Erdheim is best known as a writer of narrative texts; she also wrote radio plays and plays. In her novels, she first addresses the problematic relationship with her mother and personal therapy experiences. Later works depict excerpts from contemporary Austrian society. Most of Erdheim's works can be regarded as key literature and are characterized by a style that is partly soberly descriptive, but partly also interspersed with irony . Erdheim regularly participates in projects on Galician Jews and has published several essays on this subject.

The Federal Ministry for Education, the Arts and Sports awarded her its first prize in 1984. Other prizes followed, including the City of Vienna Prize in 1987 and the Theodor Körner Prize in 1998 . Claudia Erdheim has also received numerous scholarships since 1993 .