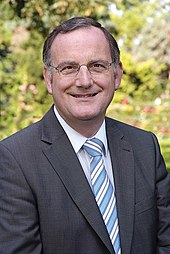 Paul Larue (born March 28, 1956 in Niederau ) has been mayor of the city of Düren in North Rhine-Westphalia since 1999 . He is also active in various functions at the German Association of Cities .

Larue graduated from high school at Wirteltor Düren in 1975 . He then completed a degree in history , Catholic theology and educational science at the University of Cologne and the Rheinische Friedrich-Wilhelms-Universität Bonn . He passed his state examination in Cologne . He then headed the Catholic Education Center in the Düren region in the Aachen diocese for 15 years .

After graduating from high school, Larue joined the CDU . In 1984 he became a competent citizen in the youth welfare committee of the city of Düren. In 1989 he was elected to the Düren city council. From 1994 to 1999 he was chairman of the CDU city council group.

Larue has been the full-time mayor of his hometown since September 26, 1999. At that time he prevailed in a runoff election with 54.64% of the vote against his predecessor Josef Vosen ( SPD ). In the local elections on September 26, 2004 , he ran again and received 60.19% of the vote, defending his post against Barthel Labenz (SPD) and four other candidates. With the local elections in 2009 on August 30, 2009, in which he prevailed with 62.73% of the votes against Henner Schmidt (SPD) and Verena Schloemer ( Greens ), Larue began his third term as Mayor of Düren. Most recently, in the election on September 13, 2015, he won 64% of the vote (with around 36% turnout ) against Elisabeth Koschorreck (“Ampel plus”) and Bernd Essler ( AfD ).

Larue also holds other offices in municipal institutions and associations such as the Heinrich-Böll-Haus Langenbroich eV.

In August 2020, Larue was awarded the Ring of Honor by Düren's Austrian partner municipality Altmünster .

Larue has been married since 1979. He has three children and four grandchildren.