Parts of this article seem out of date as of 2011/2014 .
Please help to research and insert the missing information . 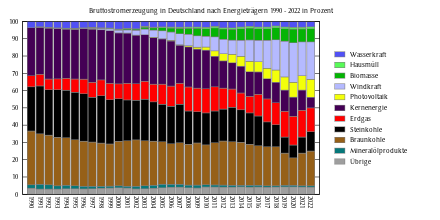 Development of electricity generation in Germany 1990–2019

The use of a single energy source for heat and power supply is problematic due to the resulting dependence on its price and on its often politically determined availability for larger numbers of people and businesses, so that an energy mix usually results in an energy mix for an entire society comes.

The amounts of available solar , hydro and wind energy are u. a. depending on season and weather (and with solar energy also on the time of day). In principle, however, they are only limited by the solar constant .

In 2018, renewable energies accounted for 37.8% of Germany’s gross electricity consumption. The CO 2 emission factor in 2017 was 486 g CO 2 / kWh. Between 1990 and 2012, this share rose from 3.4% to 24.1%. In the course of rising prices for fossil fuels, the growing ecological sensitivity in society and the state subsidy through the EEG , the share of renewable energies is expected to continue to rise in the future. New wind farms (on land and in coastal waters) are also constantly going into operation and existing wind turbines are being replaced by more efficient systems in the course of so-called “ repowering ” . Renewable energies can already replace nuclear energy by 2020 and in fact take over the entire electricity requirement in 2050.

The energy mix z. For example, in 2020, 2030 or 2040, the focus of public and political interest is also increasing because in the next few years a particularly large number of old power plants will reach the end of their economic life and / or (e.g. due to poor efficiency) only then operated when more efficient power plants are being used. The power plant operators are faced with the question of whether (and if so, with what type, with what capacity and where) they want to replace these power plants with new buildings.

In Germany, the total energy supply in business, industry and transport was based mainly on fossil energy sources until the 2010s . Up to 2013, these had a share of 81.2% of primary energy consumption, including mineral oil (33.7%), natural gas (22.6%), hard coal (13.0%), lignite (11.9%). Renewable energies covered 11.9% and nuclear energy 7.7%, and electricity trading and other energy sources together 0.7% of primary energy consumption. These are the figures for the total energy supply and should not be confused with the proportions of the respective energy sources in the electricity supply.

Numerous energy-generating companies demand "planning security" from politicians, often pointing out that their market segment is particularly capital-intensive and / or has a particularly high proportion of fixed costs .

Lobbying is often not carried out by sole proprietorships but by associations in which companies with similar or identical interests have come together. See e.g. B.

In addition to industry associations, there are also associations that bundle specific interests and lobby for them. For example, in June 2010 the Association of Coal Importers (VDK) demanded that the federal government should "continue to make up 20 percent of the energy mix in the future."