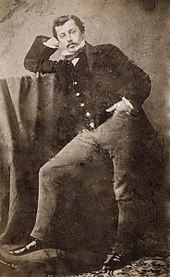 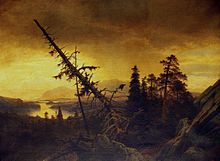 Bodom, son of pastor Thomas Bodom (1783–1832) and his wife Janniche Olsen (1792–1870), received his education in Christiania , but was already more involved in drawing at school . He escaped when he was about to take the exam. First then made a study trip to Telemark , the result of which the Kunstverein bought from Christiania.

When Hans Fredrik Gude returned from Germany in 1848, he joined him after having been a pupil of Johannes Flintoe at the Royal Drawing School (Tegneskolen) in 1847 . In 1850 he went with Gude, whose national romantic conception of art he took up, to Düsseldorf , where he settled permanently, belonged to the artists' association Malkasten and married Katharina Kühling, who gave birth to their son Erik in 1863. In 1852 he received the scholarship that Oskar I had founded in 1850 for his remarkable progress . In 1853 he became an honorary member of the Royal Academy of Art in Amsterdam . In 1853/1854 he was the private tutor of Lars Hertervig and Werner Holmberg . In Düsseldorf he exhibited his landscapes with Eduard Schulte . In 1866 he received an honorable mention at the Scandinavian exhibition in Stockholm for his main work, Bautasteine ​​am Strand (Bautastene ved Stranden) .

Influenced by August Cappelen , whom he also copied, Bodom found his nature-romantic motifs mainly in desolate, lonely forest areas. His painting was particularly characterized by a wild or melancholy mood , which he knew how to give nature. The painting From the Bondhusthal , his first major work, came to the Bridgewater Gallery in London . He is represented with five works in the National Gallery in Oslo .