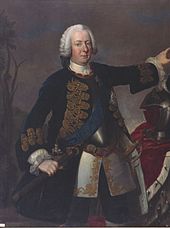 He was born in 1682 as the fifth son of Ferdinand Albrechts I von Braunschweig-Bevern and Landgravine Christine von Hessen-Eschwege . On May 1, 1706, he joined the Prussian army as a colonel. In December of that year he followed his twin brother Ferdinand Christian († 1706) as provost of the Braunschweig monasteries of St. Blasius and St. Cyriakus . In 1711 he became major general and in 1713 he finished his army service. He married Eleonore Charlotte of Courland on August 4, 1714. After the death of the ruling Duke Ludwig Rudolf on March 1, 1735, Ernst Ferdinand's older brother Ferdinand Albrecht II took over the reign in the Principality of Braunschweig-Wolfenbüttel . Ernst Ferdinand then received Bevern as a paragium. He died in Braunschweig in 1746. The younger Braunschweig-Bevern line founded by him died out with his son Friedrich Karl Ferdinand in 1809.