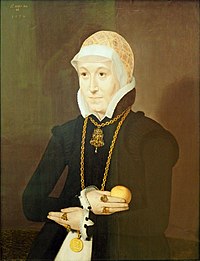 At a young age he was an avid supporter of Luther , later an advocate of the reformer Anton Corvinus , who was imprisoned at Calenberg Castle in 1549 . Ernst entered the service of Duke Heinrich the Elder as Drost in Burgdorf . J. von Braunschweig-Lüneburg .

In 1568/70 he acquired the so-called “Red Court” (today's Redenhof in Großehofstraße) from Braun von Eddingerode in Hameln , which he expanded into a residence. In the autumn of 1572 he was appointed governor of the Principality of Lüneburg by Wilhelm the Younger .

When his in-laws, the Rottorps, died out in the male line in 1576, he wanted to secure the inheritance of Hülsede for his wife against the feudal claims of the Count of Schaumburg. But when Count Adolf von Schaumburg approached Hülsede with 400 riflemen, he could not prevail against the overwhelming odds. Schaumburg then gave the property to Hermann von Mengersen .

In 1578 he bought another farm in Göttingen .

In 1579 he returned to Hameln. After a long illness he died there and was buried in the minster church.

Of his 19 children, only Henning, who acquired the nearby Hastenbeck manor in 1639, continued the tribe. Hennings' two sons founded the two current lines of the Reden family .