Eschach is a village in the city of Ravensburg in Baden-Württemberg .

The village is located in the south of the urban area. It consists of the territory of the municipality of Eschach, which was independent until January 31, 1974 and is divided into three residential districts:

The village goes back to the Upper Austrian office of Eschach and the old Weißenau monastery office with the center of Oberhofen, where the infirmary for plague sufferers used to stand. In 1826 the Oberhofen Office, the Eschach Office and some smaller parcels were combined to form the Eschach municipality within the Ravensburg Office. In 1849 the state domain of Weißenau was incorporated. In 1853, the sub-communities Eschach and Weißenau were formed within the overall community of Eschach, which were dissolved again in 1932. The seat of the municipality Eschach was in Oberhofen.

As the “residential district of Eschach”, the village provides 6 of the 32 Ravensburger municipal councils. These are chosen in a " false sub-location ".

The CDU and the Greens are each represented with seven seats, the SPD with two seats and the FDP with one seat in the local council (as of 2019).

Description of coat of arms : In a split shield in front in blue a silver abbot's staff turned to the left, behind in silver two blue wavy bars . 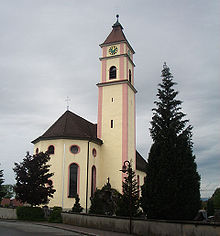 Like the rest of the Ravensburg region, Eschach has a Roman Catholic influence. The community is the seat of the following parishes, all of which belong to the Dean's Office Allgäu-Oberschwaben:

Together with the parish of St. Antonius of Padua in Oberzell, they are combined to form the pastoral care unit Ravensburg-Süd.

The townscape of Eschach is still characterized by agriculture. The special crops of the Lake Constance region are dominant, including fruit growing (mainly apples), hops , strawberries and asparagus. Fruit, strawberries and asparagus as well as homemade juices and schnapps are often sold in farm shops. The old wine-growing tradition still attests to place names such as Weingartshof and Torkenweiler (from Torkel).

The state center for psychiatry in Weißenau is housed in the monastery buildings of the former Weißenau Abbey and the surrounding new buildings. A bleaching and finishing factory , initially set up in the monastery in the 19th century, existed in spacious industrial buildings in the immediate vicinity of the monastery until the 21st century, but production was discontinued in 2006. The buildings and land were acquired by the city of Ravensburg in 2007. Otherwise mainly craft and trading companies are located in Weißenau.

The Mariatal and Karrer industrial areas are the two most important newer business locations in the city of Ravensburg, which for a long time has barely had any new industrial space in the city center. Numerous medium-sized companies are based in Karrer and Mariatal (both in Schussental), including Vetter Pharma and pro solar .

On the edge of the Karrer industrial park, the Ravensburg district has been operating a garbage dump, the Gutenfurt disposal center, since 1975 .

The Langwiese wastewater treatment plant (located in the Schussental between Untereschach and Oberzell near Lachen), which is sponsored by the Mariatal wastewater association, cleans the wastewater from the cities of Ravensburg and Weingarten and the municipalities of Baienfurt and Berg.

The Weißenau branch of the University of Tübingen operated a radio telescope with a diameter of 26 m at the Rasthalde in a forest near Weißenau from 1960. The radio astronomical observations were discontinued in 1992; the system has now been dismantled.

In the former ballroom of the Weißenau monastery, classical concerts by the cultural office of the city of Ravensburg and the Kulturkreis Eschach e. V. instead. Music associations in Gornhofen, Obereschach and Weißenau ( Musikverein Sternberg ) maintain brass music. 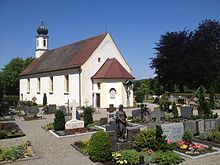 The Weißenau monastery is a main attraction on the Upper Swabian Baroque Route . Obereschach and Gornhofen are also on the main route of this holiday route.

The former Premonstratensian Abbey in Weißenau includes the baroque monastery church (today the parish church of St. Peter and Paul), which was built by Franz Beer von Blaichten from 1717 to 1724 and which is equipped with early baroque choir stalls from 1635. It has a classical organ by Johann Nepomuk Holzhey . In addition, the Holy Blood relic, the convent building with its richly stuccoed ballroom used for concerts , the gate building and the farm building of the monastery are important sights in Weißenau. The memorial of the gray buses is a memorial for the victims of the National Socialist "euthanasia".

The baroque parish church of St. Johannes Baptist in Obereschach was built between 1751 and 1754.

The parish church of St. Walburga and Ottilie in Gornhofen is also a baroque building and dates from 1728.

The St. Maria and Nikolaus chapel is located in the Mariatal cemetery. The church was consecrated in 1166, and the cemetery, too, presumably dates back to the foundation of the Premonstratensian convent of Mariatal in the 12th century, making it one of the oldest in the region. In the course of a plague epidemic, the cemetery was expanded in 1628/1629 and has served as a parish cemetery since 1662. The cemetery was last expanded in 1978.

The St. Georg chapel , built in 1616, is located in Untererschach ; a Pietà by Michel Erhart is part of its furnishings .

Also worth seeing are the Rahlenhof , the former summer residence of the Weißenau abbots (today part of the Center for Psychiatry), and the bakery with a show distillery in Oberhofen.

Sports life is shaped by the offers of the sports clubs SV Weißenau and TSV Eschach.

A local festival and children's festival takes place in Weißenau every year . Eschach pupils and citizens also take part in the Rutenfest Ravensburg . Since 1960, operates Narrenzunft "fool-Au" Weißenau the Swabian-Alemannic carnival , including a traditional night parade of fools groups from all over Upper Swabia.