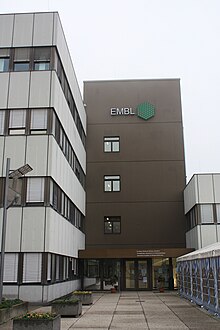 It is a basic research institute financed by public research funds from the member states. Around 85 independent research groups work at EMBL on topics from the entire spectrum of molecular biology . The laboratory is divided into six units: the main laboratory in Heidelberg as well as branches in Hinxton ( European Bioinformatics Institute ) in Great Britain, Grenoble in France, Hamburg , Monterotondo , Italy and Barcelona , Spain.

The main activities are: basic molecular biology research ; the highly qualified training of scientists, students and visiting researchers; Services for scientists in the Member States; Development of new tools and methods in the life sciences as well as active technology transfer. EMBL's international doctoral program includes around 170 students. In addition, the laboratory is involved in an active program for science and society.

Research at EMBL resulted in significant scientific breakthroughs such as the first systematic genetic analysis of the embryonic development of the fruit fly, for which the researchers Christiane Nüsslein-Volhard and Eric Wieschaus received the Nobel Prize for Medicine in 1995 . In 2017 Jacques Dubochet received the Nobel Prize in Chemistry for his cryo-electron microscopy method, which was developed at EMBL and published in 1981 .

EMBL is an international organization founded by nine European countries and Israel by agreement of May 10, 1973 . In its activities, it enjoys immunity within the limits set by the State Convention. For example, there is no immunity in the case of counterclaims and civil law proceedings due to accidents in the operation and operation of motor vehicles in the laboratory. The premises are also inviolable within certain limits. Furthermore, the laboratory is exempt from taxes, duties and duties, with the exception of taxes and duties on services provided by public utilities and taxes and duties on the personal needs of employees. Further privileges exist in the area of ​​communication and the acceptance of currencies. Entry is made easier for guests of the laboratory. The employees enjoy immunity for their official acts, whereby there are exceptions for acts in road traffic, and are subject to the entry and residence regulations that are granted to employees of international organizations in Germany as well as some minor privileges. Similar regulations also apply to representatives of the member states. However, the exemptions for employees and representatives do not apply to Germans (with the exception of the immunity of official acts), and the immunity can also be lifted in individual cases. Salaries are exempt from income tax as long as EMBL collects an internal tax in favor of the laboratory; They are exempt from social security contributions as long as the laboratory itself operates a social security system that the Federal Republic of Germany considers appropriate.

Agreements with the same wording have also been made for the other countries with an EMBL headquarters.

The working groups at EMBL are divided into

The General Directors of EMBL since its inception in 1974: