Venous-arterial ECMO in the newborn (schematic) 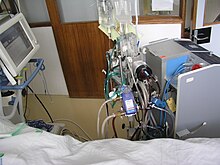 The extracorporeal membrane oxygenation ( ECMO ) and the extracorporeal lung assist ( ECLA ) are intensive care techniques in which a machine or completely takes over partly the respiratory function of the patient. They are used in patients whose lungs are severely damaged ( ARDS ) and no longer allow gas exchange to the extent that ensures the respiratory function. They are often used in newborns who have lung damage ( respiratory distress syndrome , meconium aspiration , persistent pulmonary hypertension ) or certain congenital heart defects.

The ECMO can ensure adequate oxygenation for days or weeks, giving the lungs time to heal without aggressive ventilation . Nevertheless, the ECMO because of the high technical and human requirements, cost and risk of complications (eg. As bleeding) as a last treatment option (is a last resort ) is considered.

An ECMO device is a special oxygenator , namely a membrane oxygenator . Technically, it is like a heart-lung machine . To pick up an ECMO, cannulas are inserted into two large blood vessels . A blood clotting to avoid is one anticoagulant agents ( anticoagulants to), usually heparin . The ECMO device pumps blood continuously through a membrane oxygenator, which replaces gas exchange in the lungs: It removes carbon dioxide from the blood and enriches it with oxygen . The blood prepared in this way is then returned to the patient.

The ECMO is currently operated as a manually set therapy in which a doctor or cardio technician specifies the necessary control values. A patient-individually regulated ECMO is being developed as the subject of various research projects.

Variants of the ECMO

There are different forms of ECMO, the most important being the veno-venous ECMO (VV-ECMO), the veno-arterial ECMO (VA-ECMO) and the pumpless arterio-venous ECLA (pECLA) . In the first two versions, the blood is drawn from large veins (e.g. vena femoralis or vena jugularis interna ). With VV-ECMO, the oxygenated blood is then fed back into a vein; it is indicated in severe lung failure with sufficient pumping function of the heart. With VA-ECMO, on the other hand, the blood is directed past the heart into an artery ( arteria femoralis ), creating a parallel circuit. Since this relieves the heart, this method is used in patients with poor heart pump function ( heart failure ). The pECLA is used in patients with adequate cardiac function who require less support with gas exchange. Since no pump is used, there is generally less blood damage with pECLA.

The first use of cardiopulmonary bypass for the treatment of lung failure (ARDS) took place in the early 1970s. With the prospect of an effective therapeutic instrument for the treatment of ARDS, the National Institutes of Health (highest health authority of the USA) started an ARDS multicenter study. The results were sobering: the group with ECMO treatment did not show any better treatment results, and the study was terminated prematurely. Despite methodological deficiencies, the study was a setback for ECMO development. As a result, research concentrated again on improving conventional ventilation methods .

It was not until the 1980s that an Italian research group succeeded in using improved methods to show the benefits of ECMO, albeit in a non-controlled study on carbon dioxide elimination. The result of this and other follow-up examinations is still valid today that ECMO can be useful in ARDS in adults, but without being able to prove a significant advantage over ventilation therapy. In 2006 a randomized multicenter study with 80 centers and 180 patients was completed in Great Britain to determine the value of ECMO in ARDS therapy. Previously published results appear to be beneficial for the use of extracorporeal membrane oxygenation in adult lung failure.

ECMO in the newborn

ECMO in an infant

Bartlett reported the first successful neonatal ECMO application in California in 1975. This was followed by the first landmark study that showed increased survival from treatment. The significantly better response to ECMO therapy in newborns than in adults led to an increasing number of ECMO treatment cases and ECMO centers, initially in the USA and later worldwide.

In February 1987, the first successful ECMO application was carried out on a newborn in German-speaking countries in the children's clinic at the Mannheim University Hospital . A randomized multicenter study of newborns was carried out in Great Britain from 1994 to 1995. Due to the significantly higher survival rate in the ECMO treatment group, the study was terminated early in November 1995 because continuation was not ethically justifiable. In subsequent follow-up examinations, the study also refuted the fear that the higher survival rate in the ECMO treatment group would be “bought” by psychomotor deficits. Instead, the benefits of ECMO are retained in the follow-up examination of the children.

In 1989 a central ECMO registry was established in Ann Arbor , Michigan (USA). There, ECLS applications are registered centrally and broken down in detail. This allows a precise overview of the effectiveness and the course of the number of cases of the therapy in certain clinical pictures. This allows therapy-specific improvements or problems in the area of ​​ECLS applications to be identified more quickly and passed on to other ECMO centers. By the end of 2012, more than 53,000 ECLS applications had been reported and statistically evaluated by the Extracorporeal Life Support Organization (ELSO) worldwide. Currently (as of January 2013), ELSO has 200 active ECMO centers worldwide.

As already mentioned, the ECMO is now only as a result verschiedenster factors Ultima ratio used therapy. One of these factors is the various complications that can occur during ECMO treatment. These include, among other things, the suction of the extraction cannula against the vessel wall , a dislocation of one of the cannulas, a defect in the blood pump used or an air embolism .

The treatment or the early detection of these complications is the subject of current research projects. However, all of this work is still in the preclinical stages.