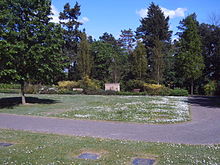 View across the United Nations field

The United Nations field is a grave complex and memorial for victims of National Socialism in the Magdeburg district of Westerhüsen .

In the early summer of 1941 a 1,500 m 2 unused piece of the Westerhüsen cemetery was separated from the cemetery and used as a cemetery for foreigners. From 1941 to April 1945, perished forced laborers , prisoners of war and concentration camp inmates were buried on the fenced-in area on the south side of the Westerhüsen cemetery in Magdeburg . The exact number of those buried is unknown. A figure is based on 766 burials from 11 countries, including about 60 children. Other information cites 788 buried people.

From 1942, the Diana forced labor camp was located immediately north of the cemetery . The remote location spoke in favor of the foreigners cemetery in this area. In addition, the area was already fenced off and the existing old trees made it difficult to see. The chain link fence around the foreigners cemetery was 2 meters high. The foreigner cemetery had its own entrance on the south side. Burials took place in a paper sack, with the corpses being buried on their sides to save space. Instead of a grave inscription, a wooden sign protruding about 25 cm from the ground was used, on which a matriculation or prisoner number was noted.

In April 1945, the American soldiers who fell in the vicinity of Westerhüsens were also buried in the cemetery, but were later reburied. It is assumed that around 20 to 50 US soldiers died in the attempt to form a bridgehead in the Kreuzhorst and in the fighting around Magdeburg airfield . By June 1945, however, the US soldiers were exhumed and transferred to the US occupation zone. The German soldiers were buried in the neighboring local cemetery.

After the end of the Second World War , the site was redesigned until 1947 on the instructions of the Soviet military administration. Paths were laid out, the graves received tombstones and grave borders made of gray artificial stone. There were names on the gravestones and a Soviet star was also depicted. A memorial with the insignia of the Soviet Union, a star and a hammer and sickle was erected in the center. The mesh and barbed wire originally used as a fence was removed. Between 1945 and 1950 various exhumations and transfers of the remains to their home countries, such as Belgium, Denmark , France, the Netherlands and Norway, took place. Since there are no precise records of this, the exact number of victims lying in Westerhüsen is not known. There are four names on each of today's tombstones, although the number of dead people in each grave is unknown.

During the GDR era , the paths were filled with gravel. The Westerhüser School held regular pioneering, FDJ and athlete honors on the site .

After 1989, the facility was opened with the support of the German War Graves Commission e. V. renovated and partly redesigned. The old gravestones were removed, the site leveled, lawns sown and dark gravestones embedded in the area. The system was divided into four fields separated by paths. Only children are buried in field 4. The number of children buried is not known, but there are believed to be significantly more children than the names on the gravestones. Up to 20 children are said to be buried in individual graves. It was planned to complete the redesign by May 8, 1995, the 50th anniversary of the end of the war. Due to financing problems, however, the work was delayed and could not be completed until May 8, 1996. A total of 215 tombstones with 766 names were placed, although the spelling of the names often differs from those in the written documents. Information such as child , prisoner or unknown was also given on individual gravestones . The details of concentration camp inmates and prisoners of war used on the former gravestones were no longer used. The cemetery was given its current name in 1995 in honor of the United Nations founded in April 1945 .

In 2005, a memorial stone was erected in front of the cemetery with the support of the President of the State Parliament of Saxony-Anhalt , Dieter Steinecke . It bears the inscription: 766 victims of World War II from 11 nations rest in this cemetery . The following quote is noted: Peace is not everything, but without peace everything is nothing. W. Brandt . On the day of commemoration in 2009, November 15, the Volksbund der Deutschen Kriegsgräberfürsorge set up a memorial book made of stainless steel directly on the field. It records the known dates of the individual victims. The data go back to research by Westerhüsener Peter-Ernst Schmidt . An information board was set up next to it, explaining the history of the burial ground and indicating that there is a fate behind each of the names in the name book. At the request of the Bündnis 90 / Die Grünen parliamentary group , the Magdeburg city council decided on February 28, 2013 to make the memorial book accessible online on the city's website. The decision was implemented in March 2013.

The memorial is signposted as a war cemetery .