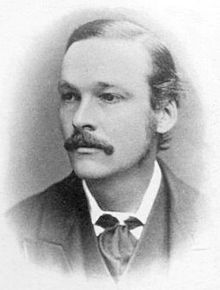 Balfour was a son of James Maitland Balfour, landlord of Whittingehame in East Lothian, and his wife Lady Blanche Cecil, who was a daughter of the 2nd Marquess of Salisbury . He was the younger brother of the British politician Arthur Balfour, 1st Earl of Balfour (1848-1930). He attended Harrow School where he was an average student. However, one of his teachers, George Griffith, helped him with the science subjects. He was particularly interested in geology.

He studied from 1870 at Trinity College in Cambridge, where he then became a lecturer in 1876, later in 1882 professor of embryology. He had a fatal accident during a mountain tour in the Alps on July 18 or 19, 1882. He had tried to climb Mont Blanc .

Balfour is considered to be one of the founders of modern embryology . In 1880 he made the proposal to unite all animal groups that develop a notochord during their individual development in the tribe Chordata .

In 1876, Francis Maitland Balfour (1851–1882), in his monograph on the development of sharks, described head segmentation (see also cephalization ) using a well-known scheme . He assigned a cranial nerve , a gill arch and a head somite to each segment . A total of eight main segments were defined.