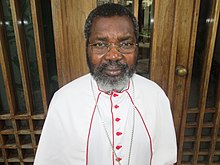 In September 2007, as part of the 33-year celebration of Mozambique's independence, he accused European states of deliberately delivering AIDS- infected condoms to Africa in order to promote the colonization of the continent. Chimoio says: "Condoms are not sure because I know that there are two countries in Europe, they are making condoms with the virus on purpose".