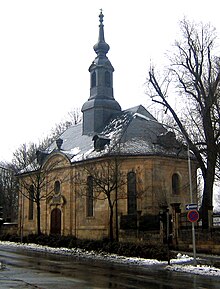 Gottesackerkirche in the city cemetery

There are five cemeteries in the city ​​of Bayreuth . 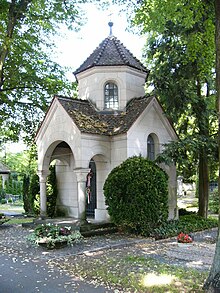 Grave of Jean Paul in the city cemetery 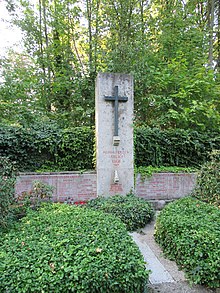 Grave memorial for 70 bomb victims in the city cemetery

The oldest existing cemetery is the city cemetery with a number of grave monuments of famous personalities. It was laid out in 1545 outside the city wall and replaced the "God's field" at the city ​​church . This was used until 1533, in the following twelve years the dead were buried in the cemetery of the nearby Altenstadt in order to counter the risk of infection with epidemics .

Located between Erlanger Strasse and Mistelbach , it houses the resting places of Franz Liszt , Jean Paul , Emil Warburg , Siegfried , Wieland and Wolfgang Wagner, as well as the conductor Hans Richter . The most magnificent tomb is the burial chapel of Duke Alexander von Württemberg . A commemorative plaque was put up in 1991 for Maria Anna Thekla Mozart , who was buried in the city cemetery in 1841.

The “Gottesackerkirche” is located at the eastern entrance to the cemetery. The first building was built in 1562 and expanded in 1599. It was demolished in 1779 and replaced by the Evangelical Lutheran cemetery church in 1781 , which continues the name in the vernacular. A Latin inscription is carved on each of the four sides of the facade (three distiches in total):

EN TEMPLUM MORTIS SIC VIVERE DISCE VIATOR
UT MORIENS VITAE TEMPLA SUBIRE QUEAS
(Behold the Temple of Doom! Wanderer learn to live like this,
that in death you can enter the temples of life.)

DISCE MORI VIVENS MORITURUS VIVE SUBINDE
UT TE LUX COELI DUM MORIERE BED
(Learn to die while you live and live as one who gradually dies,
so that the light of heaven may make you happy while you die.)

OCCIDIT OMNIS HOMO VITALI SOLE CADENTE
(Everyone dies when the sun of life goes down.)

Franz Liszt's grave chapel was destroyed in the air raids on Bayreuth in April 1945 and rebuilt in the 1970s. In October 1965 the funeral hall was opened .

In the cemetery there are numerous war cemeteries from the First and Second World War , including the post-war period: for Germans, Italians, Romanians, Russians, Ukrainians and other Eastern Europeans (in Bayreuth there was a camp for displaced persons ). Victims of the April 1945 bombing raids were also buried in the city cemetery. Seventy of them, from Bayreuth itself, from other German cities and abroad, a memorial was erected at the grave by relatives. 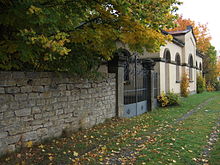 Gate and Tahara House at the Jewish Cemetery

The first burial in the Jewish cemetery took place on June 25, 1786. The official inauguration took place in 1787. Because of its location not far from the cross , it was called the "burial place above the cross". According to tradition, all tombstones face east. The cemetery keeper's house served as a makeshift synagogue after the pogroms of 1938, commonly known as the Reichskristallnacht .

In the directory Bayreuth Art Monuments 1959 this important cultural and historical site was not mentioned.

Gravestone of the Leers family in the Sankt Georgen cemetery

The cemetery of the then still independent town of Sankt Georgen am See was established in 1709. Behind the stately entrance gate with sandstone ornaments, there are several handsome baroque, rococo and classicism graves. Later it was the cemetery for the residents of Bayreuth north of the Red Main well into the 20th century .

In the cemetery is the large St. Georgen war cemetery for those who died in the Second World War , including many of the 781 victims of the Allied air raids on Bayreuth in April 1945. The latter can only be recognized among the 992 war victims buried there if the dates of the air raids are known: 5 ., April 8 and 11, 1945.

The parish village of Sankt Johannis, which was incorporated into Bayreuth in 1939, has its own cemetery on its western edge.

At this point around noon on April 14, 1945, the American emissary Karl Ruth and Bayreuth's NS mayor Friedrich Kempfler negotiated in vain with the Wehrmacht general August Hagl about the surrender of the city without a fight. As a result of Hagl's refusal, the orangery and the sun temple in the nearby Hermitage Park were senselessly destroyed at the last minute by US fighter bombers .

Entrance to the south cemetery and funeral hall

On the southern edge of the Saas district is the southern cemetery with a funeral hall and crematorium , which was handed over in November 1981 .

The grave of Richard Wagner and his wife Cosima is not in a cemetery, but in the publicly accessible park of his Wahnfried house .

Burial place of the margraves

In the town church there is a princely crypt of the Bayreuth margraves. In the years from 1620 to 1733, 26 members of the margravial family were buried there, including the margraves Christian, Christian Ernst and Georg Wilhelm. Margravine Wilhelmine , her husband Friedrich von Brandenburg-Bayreuth and their daughter Elisabeth Friederike Sophie von Brandenburg-Bayreuth are buried in the castle church.