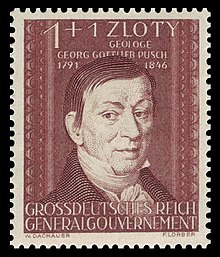 Portrait of GG Pusch on a 1944 postage stamp.

From 1806 Pusch studied mining at the Bergakademie Freiberg and joined the Erzgebirge Landsmannschaft ( Corps Montania ). From 1811 he studied law at the University of Leipzig and was active in the Corps Lusatia Leipzig . From 1816 to 1826 he worked as a professor of chemistry and metallurgy at the Bergakademie Kielce / Poland. In 1828 he took part in the natural scientist congress in Berlin called by Alexander von Humboldt and gave a keynote address on the structure of the Carpathian Mountains . Until 1834 he belonged to the mining department of Warsaw, then he was a mint master until 1842at the mint there, Bergrat, chief of the mountain and hut management. He carried out pioneering work in scientific fields that were still unexplored at the time. He published numerous papers on mineral chemistry, geology and mining science. His research trips earned him the reputation of a “Polish Humboldt”. Pushch died in the year of the Wielkopolska Uprising (1846) .

In 1944 , the German Reichspost issued a commemorative stamp with Pusch in the Generalgouvernement .