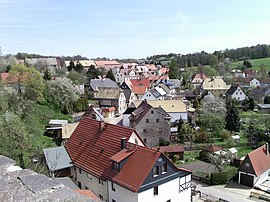 View from the castle ruins 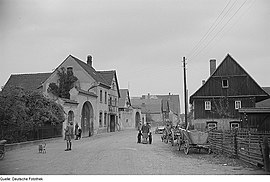 Kohren-Sahlis is a district of the city of Frohburg in the south of the Leipzig district in Saxony . Until December 31, 2017, it was an independent town, best known for its pottery trade. It forms the center of the Kohrener Land .

Kohren-Sahlis is roughly halfway between Leipzig and Chemnitz . It borders in the north on Frohburg, in the northeast and east on the city of Geithain and in the south on the city of Penig in the district of central Saxony . In the west, Kohren-Sahlis borders the Thuringian communities of Langenleuba-Niederhain and Windischleuba . The river Wyhra and the three legendary streams mouse, rat and cat flow through Kohren-Sahlis.

Kohren was first mentioned in a chronicle of Bishop Thietmar von Merseburg around 974 . In 1190 the noble lords of Kohren appeared as imperial free owners of Kohren Castle . These built up their rule in Kohren in the course of the German eastward expansion in the second half of the 12th century. In 1220 the castle was destroyed, which was rebuilt around 1240. The imperial rule of the Lords of Kohren came to an end at the beginning of the 14th century. They were last mentioned in a document in 1303. Various families, such as those of Schönburg , Leisnig or the bailiffs of Plauen , owned the castle in the years that followed. In 1357 a Friedrich von Schönburg left Geithain and Kohren to the Lords of Reuss . In the second half of the 15th century, the lords of Einsiedel owned the castle. However, they used Gnandstein Castle as their residence, which is why Kohren Castle was abandoned and gradually demolished for the extraction of building material. Only the two tower ruins have been preserved from the castle and still shape the city skyline today. In 1453 Kohren received city ​​rights .

Sahlis was mentioned as a manor as early as 1350. In 1445 Sahlis is mentioned as a knight's seat and in 1551 as a manor. In 1602 the von Einsiedel sold it together with Kohren. The textile merchant Crusius acquired the manor in 1754 and had the estate renewed two years later. In 1776 the mansion was rebuilt and rebuilt in 1858. The Rococo park with many water features and sculptures was built in 1771, the orangery in 1891. The von Crusius family remained in the possession of the Sahlis manor until it was expropriated in 1945 .

The town of Kohren and the village of Sahlis belonged to the Altenburg care center around 1445/47 . After this came to the Ernestines through the Naumburg Treaty in 1554/57 , Kohren and Sahlis remained with the Albertines and until 1856 were subordinate to the Electoral Saxon or Royal Saxon Office of Borna . From 1856 both places belonged to the Frohburg court office and from 1875 to the Borna district administration .

After decades of effort, Kohren received a rail connection with the opening of the Wyhratalbahn on April 30, 1906. The line led to Frohburg on the Neukieritzsch – Chemnitz railway line . It was shut down in 1967 and later dismantled. The pottery fountain, inaugurated on June 24, 1928, is the city's landmark. Design and modeling go back to art ceramist Kurt Feuerriegel . In 1934 Kohren was united with the village of Sahlis to form the city of Kohren-Sahlis.

From November 1, 1942 to April 14, 1945, the “Sonnenwiese” children's home was located in Kohren-Sahlis and was run by the Lebensborn SS organization . Mainly so-called Tyskerbarn , children from Norway (Norwegian mothers, German soldiers as fathers) were housed here before they were passed on to families for adoption before 1945 and afterwards.

On January 1, 2018, Kohren-Sahlis was incorporated into the city of Frohburg. 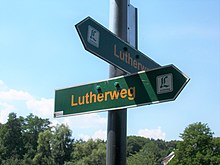 Kohren-Sahlis is located in a traditionally Lutheran area. The parish of Kohrener Land of the Evangelical Lutheran Church of Saxony includes the Sankt Gangolf Church in Kohren-Sahlis, the Christ Church in Rüdigsdorf, the village churches in Altmörbitz and Gnandstein and the Gnandstein Castle Chapel. There is also a parish in Jahnshain, which belongs to the Geithainer Land parish . The Heimvolkshochschule Kohren-Sahlis, known as the Evangelical Center for Rural Areas , is of supra-local importance . The Luther Trail in Saxony runs through Kohren-Sahlis .

The few Catholics in Kohren-Sahlis belong to the parish of St. Joseph in Borna , diocese of Dresden-Meißen .

Description : In blue on a golden shield base, a golden wall with two tinned towers, over which seven black birds fly (3: 4 posed).

The city council consisted of fourteen city councilors. After the last local election in May 2014, the 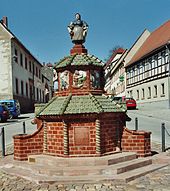 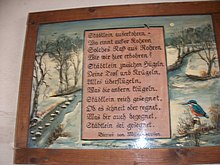 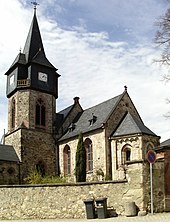 Kohren-Sahlis is on the Lutherweg Sachsen and the Via Porphyria .

State road 51 Borna - Penig runs through the area of ​​Kohren-Sahlis . The Leipzig-Altenburg Airport is located ten kilometers away.

Until 1967 there was a railway line from Frohburg to Kohren to Sahlis . The Kohren-Sahlis station building is still clearly visible, but there is now a cycle path on the embankment .