The three - frame house in Groß-Buchholzer Kirchweg 66 in (today's) Hanoverian district Groß-Buchholz is a listed half-timbered house from the 18th century.

Slightly damaged information board about the red beech on the property, which was placed under nature protection in 1986 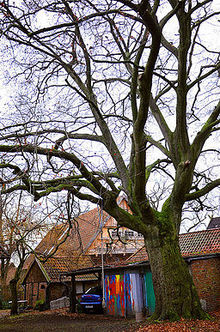 The red beech, which was placed under protection as a natural monument H-S 24 in 1986 by the nature conservation authority of the city of Hanover

The property was part of the so-called Buchenhof, the Vollmeierhof 8 mentioned just a few decades after the Thirty Years War in 1689 , the main building of which can be found today under Kapellenbrink 6 and 8 .

There is a red beech tree on the property , which, according to a notice board , was placed under protection as a natural monument H-S 24 by the city of Hanover as the local nature conservation authority in May 1986 . The city dated the tree to an age of around 200 years (planted around the end of the 18th century or all of it). According to the table, the beech tree had a trunk circumference of 4.70 m and a treetop width of 22 at the time of its special protection position.

The half-timbered house on the divided property is a residential building originally from the middle of the 18th century. The three-frame house was formerly used as the old parting house for the yard of Vollmeiers Reinecke , which was operated until 1920. There are no inscriptions to be found that would allow the building to be dated. Next to it is a half-timbered bakery . Around 1920 the architect Ferdinand Möller acquired the property in the street Kapellenbrink, today Kapellenbrink 6 to 10 as well as Groß-Buchholzer Kirchweg 66. The property and buildings belonging to it remained in the property of the descendants of the buyer.

In 1969, the Magdić family moved to Groß-Buchholz and initially restored the gable of the main building of the Buchenhof with a few friends, and later moved into the half-timbered house on Groß-Buchholzer Kirchweg, which had been converted from an old divider - into an artist's house and studio of Vladimir Magdić.

The house houses the studio of the Croatian sculptor, painter, illustrator and comic book artist Vladimir Magdić, who died in 2011 . So far, following the tradition of the late graphic artist , the building has been opened to visitors once a year on the “ open day ”.