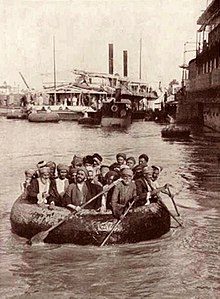 Guffa ( Arabic , plural guffāt, also quffa, plural quffāt ), was a traditional, mostly reed- woven, round basket boat that was used on the Euphrates and Tigris in Iraq until the 1970s.

The Arabic name means "basket" and is probably derived from the Latin and Greek word cophinus / cophinos for "basket" or "carrying basket", from which German " case " became. Alternatively, guffa is traced back to the Akkadian word quppu , which is synonymous , and “suitcase” or, accordingly, the French “coffre” is understood as Arabism via the mediating guffa .

A cylinder seal made of lapis lazuli that was found in Uruk and dates back to around 3000 BC. BC, shows the cross-section through a boat, the hull of which is pulled upwards in a semicircle on both sides. The standing figure in the middle of the boat probably represents a king or another dignitary. A smaller standing figure on the left is recognizable as a helmsman, on the right a small oarsman is kneeling. Next to the king, a bull carries a basket-like top, which is surmounted by two bundles of reed rings, the symbol of the Sumerian goddess Inanna . A cult practice is shown in which on a feast day the image of the god was brought to another place in a procession by water. The picture of the boat shows an elongated reed boat or, because of the shape and the thin line of the hull, more likely a round boat.

Round boats called Quppu are depicted on reliefs that were found in Assyrian palaces and from the reigns of Aššur-naṣir-apli II (883–859 BC), Sin-ahhe-eriba (705–680) and Aššur-bani -apli (669-631 / 627). From the library of the latter there are cuneiform tablets in which the legend of the birth of King Sargon of Akkad from the first half of the 3rd millennium BC. Chr. Is handed down. Accordingly, Sargon's mother secretly released the newborn baby on the Euphrates in a reed boat (literally "basket made of cut reed") that was sealed with asphalt . The story found a biblical equivalent in Exodus .

The round boats were usually paddled or steered by poke rods and moved forward by two men either facing each other or standing to one side . According to the reliefs, larger quppus were designed for four boatmen and the transport of a chariot . Upstream was treideln usual. Transport rafts (Akkadian kalakku ) were used for longer distances and larger loads . Especially in the canals in the south there must have been elongated boats that were moved with paddles . In the Babylonian collection of laws Codex Ḫammurapi from the 18th century BC Paragraphs 234 to 240 deal with shipping. They show that there were also sailboats and larger "longships" that were rowed and could go upstream. Despite the shortage of wood, some of the ships could have been made from wood planks.

The ancient Greek historian Herodotus reported in the 5th century BC About boats whose skeleton was covered with skins. The inside of the circular vehicles would have been completely filled with straw. The cargo would have consisted mostly of clay jugs of wine and a live donkey. The control downstream would have been carried out by two men with stakes. The stated payload for the largest boats of up to 5000 talents (one talent corresponded to almost 30 kilograms) is likely to be exaggerated. According to Herodotus, the boats were manufactured in Armenia and, after they had arrived with their cargo in Babylonia, were dismantled into individual parts. Since it was not possible to go up the Euphrates because of the current, the wooden parts were sold to Herodotus and the hides were transported back overland on the donkeys they had brought with them. Herodotus may have mixed up quppus and the larger kalakkus in his description , because until the beginning of the 20th century rafts (Arabic kelek ) were dismantled in this way at the destination. Rafts consisted of inflated goat skin sacks connected with a grid of wooden poles.

Both modern and ancient guffas consisted of willow branches or the ribs of date palms that crossed in the middle. An outer layer of half grass was tightly woven, shaped and then connected to the ribs with strings made of coconut fibers for stabilization . The curved side walls narrowed slightly at the top and formed a bulge. The outside of the boats was sealed with asphalt, which in Mesopotamia was obtained from natural deposits in limestone mountains on the edge of the plain. Most of the asphalt came from Hit (north of Ramadi ) on the Euphrates. In contrast to the untreated reed bundle boats, this resulted in a smooth and black exterior. The basket boats with a mean diameter of two meters offered space for six people. Paddles or bars were used to move forward. In the 19th century, in addition to the small round boats stabilized with split bamboo , larger boats made of teak were also described.

Another type of construction for the round boats can be seen on the ancient reliefs. Two reliefs from the time of Sin-ahhe-eriba show round boats made of several composite animal skins with a reinforced upper edge. You are controlled by two men. The skins boats described by Herodotus were larger and, according to relief images, seem to have been used to transport stones.

Some larger boats had diameters between three and over five meters and a draft of about one meter. They could carry three to seven tons of load. In the 20th century, the small round boats with a diameter of two meters were mainly used as dinghies for motor ships and for landing people from these ships on the loamy river banks. The faster, elongated paddle boats used on the branched waterways of the Shatt al-Arab consist of untarred bundles of reeds and are called zaima , or wooden planks with frames and with pointed ends (tarada) . Similar design descendants of the old Mesopotamian basket boats are still in use on the South Indian rivers Kaveri and Tungabhadra .