Guttin is a desert in the municipality of Süderholz in the south of the Vorpommern-Rügen district . The desert consists of the settlement desert and the Guttin castle wall . The soil monument belongs to the field mark of the Willershusen district. 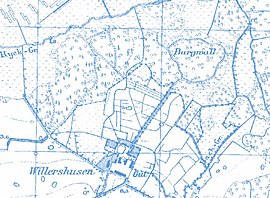 Willershusen with Guttin deserted area at the top right around 1880

Guttin castle wall, detail with contour lines, on the right the settlement in the Dreiblattwiese

The desert is 11 km east of Grimmen , 11.5 km northwest of Greifswald and 24 km southeast of Stralsund . The Ryck flows through the area and is fed by several trenches that also surround the desert. The desert lies on a low area with -1.1 to 3.8 m above sea level.

The castle wall of Guttin is dated to the late Bronze Age (1200 to 600 BC) and the Iron Age (600 BC to 600) due to the more numerous finds. These castles are rather rare in this area. It can be assumed that the ramparts continued to be used in Slavic times (600 to 1200), although finds are the exception here. The castle wall is still distinctive today and, although overgrown by the forest, is well preserved.

The settlement next to the castle was assigned to the Slav period. This also agrees with the documents from this transition period from the Slavic phase to the early German (1230 to 1400) settlement.

Dataset on and literature on Guttin (desert) in the state bibliography MV - No hit on October 18, 2016.